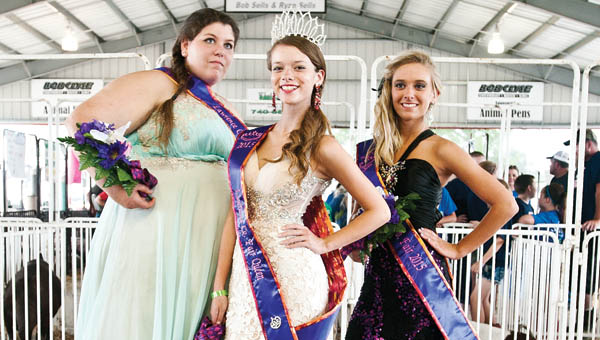 Kimberly Schmidt, center, is this year’s Lawrence County Fair queen. Standing left to Schmidt is Katie Webb, first runner up, and to the right is Shelby Dalton, second runner up.

ROME TOWNSHIP — Evening gowns with farm boots was the dress on Sunday as Kimberly Schmidt was crowned the 2015 Lawrence County Fair Queen with Kaylee Cade as princess.

Almost non-stop rains for the past few days turned much of the fairgrounds into a mudbath requiring a practical dress along with their fancy clothes.

The two women were chosen from a field of seven for queen and five for princess. They were judged on their knowledge of 4-H in interviews that took place earlier on Sunday.

“I am really excited,” Schmidt said. “I really want to be a positive role model.”

Cade said she was excited to receive the honor and really wasn’t expecting to win.

Schmidt, a senior at Dawson-Bryant High School, is the daughter of Jackie Schmidt and the late Charlie Schmidt. She is a member of Sidekicks.

Named first runner up for the princess contest was Hannah Maynard, daughter of Kelley Maynard, freshman at Fairland High School and member of the Lucky Renegades. Named second runner up was Sarah Shope, daughter of Bill and Kathy Shope, a freshman at Rock Hill and a member of Back Road Haybalers.

Jessi Newman was the pageant coordinator.