Fair weather not so fair 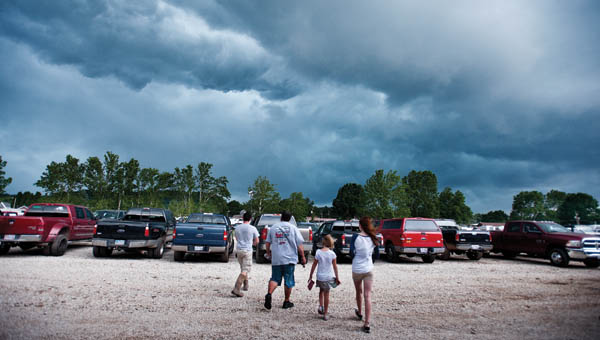 A family makes their way to their vehicle as storm clouds quickly roll in over the fairgrounds Monday.

ROME TOWNSHIP — High winds and torrential rains that hit Lawrence County mid afternoon on Monday forced the evacuation of more than 200 from the Lawrence County Fairgrounds.

Reports of the potentially dangerous weather brought the fair’s emergency management team out to determine if the grounds should be closed.

“The warnings were for extremely high winds,” Randall Lambert, fair board president, said. “For everyone’s safety we decided we needed to secure everyone, get everyone out of the campers.”

Campers, carnival vendors and fairgoers were sent to two buildings on the fairgrounds and Fairland Middle School next door.

“The Fairland Board of Education let us use the middle school so half the people are there,” Lambert said at 4:15 p.m. Monday. “We are just waiting for it to pass. The rain is supposed to last an hour.”

The decision was made about 3:45 p.m. by the fair’s EMA team, made up of Lambert, the sheriff and Rome township fire chief.

Orders went out via the fairgrounds public address system that reaches the entire venue.

“The winds were not as bad as we had feared, but we had everybody secured,” the fair board president said.

Fair volunteers were stationed at the livestock barn to make sure the animals were safe.

“The animals are fine,” Lambert said. “We have people posted in the barn. Everybody cooperated and it worked real well.”

Gearing up to cover pay hikes for officeholders