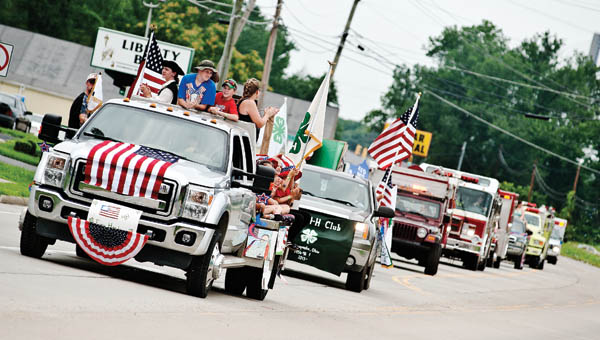 ROME TOWNSHIP — Angus was getting a little extra conditioner in the mane and tail as Aubrey Carey of Adkins Quarter Horse Farm was getting the part Clydesdale-part Gypsy ready for this year’s 4-H parade.

Nearby in the parking lot of the Kroger in Proctorville, 4-H clubs were polishing up floats and finding their places for the Sunday afternoon parade that would start this year’s Lawrence County Fair.

Following the theme of “4-H is All American” floats took on a patriotic look including one by the Lucky Renegades who dedicated theirs to American icons.

On the float were Mt. Rushmore thanks to some cardboard and tissue paper spray painted gray for stones; Mary Lou Retton; Betsy Ross, and John Hancock.

The parade wound through the village ending up at the grandstand where judges gave their appraisal.

Then opening ceremony began at the livestock arena with fair board president Randall Lambert.

“I would like to thank the county commissioners, the clerk of courts and the county engineer for making this fair a success,” Lambert told the audience.

A contribution of $35,000 was made by them to the event either in cash or in-kind contributions like gravel from the engineer’s office.

“We are striving to improve the fairgrounds,” he said. “The fair board each year hopes to make improvements with the help of the county. 4-H is one of the greatest things we have in America.”

Sarah Everhart, 2015 Ohio State fair queen was introduced. Brenna Morris and Cheryl Crawford were announced as the winners of the $250 4-H scholarship.

Winners in the parade were Silver Spurs in the walking/riding category; pickup category Farm Hands, Starlite and Gingham and Denim; and Float, Lucky Renegades, Getaway Go-Getters and Scottown.