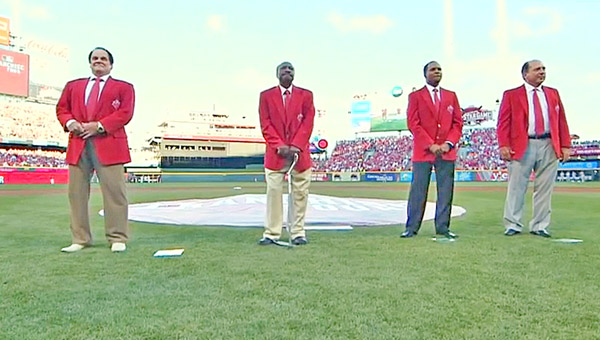 Cincinnati honored the Franchise Four — the top four players of each Major League Baseball franchise as voted on by the fans — prior to Tuesday’s All-Star Game. The top four Reds’ players of all-time were, left to right, Pete Rose, Joe Morgan, Barry Larkin and Johnny Bench. Bench was named to the four greatest living players along with Hank Aaron, Willie Mays and Sandy Koufax. (Courtesy of The Cincinnati Reds.com)

CINCINNATI (AP) — Pete Rose came home for the All-Star Game and made a rare on-field appearance in the place where he’s still treated like a king.

The hits king was voted one of Cincinnati’s Franchise Four players as part of a Major League Baseball promotion. Rose and Hall of Famers Johnny Bench, Barry Larkin and Joe Morgan were introduced on the field at Great American Ball Park before the All-Star Game on Tuesday night.

The 74-year-old Rose was last out of the AL dugout. Fans started chanting “Pete! Pete!” when they saw him reach the top step, wearing a red jacket and tie.

He always gets a good reception in his hometown. This one was a bit more subdued than usual — home run derby champion Todd Frazier got a more raucous cheer, and the boos for Cardinals catcher Yadier Molina were louder, as well.

Even so, Rose acknowledged it was emotional.

“The only bad thing about being out there: I didn’t get no at-bats,” Rose told reporters afterward. “I wish I had gotten a couple of at-bats. The fans were wonderful.

“I’ve been going through this love affair for 30 years. The fans are great.”

What’s next for Rose? He still has no idea.

Rose was banned for betting on baseball in 1989 and has a longstanding application for reinstatement pending. Commissioner Rob Manfred said on Tuesday that he hasn’t yet scheduled a meeting with Rose to discuss it.

“I frankly was surprised at how much material there was to be reviewed,” Manfred said. “We’re taking a fresh look at all of that. I remain committed to the idea that Mr. Rose deserves an opportunity to tell me in whatever format he feels most comfortable, whatever he wants me to know about the issues. And I’m sure there will be an in-person meeting.”

Rose got to meet Manfred for the first time as he waited to go on the field.

“I’ve never talked about a guy so much I’ve never met,” Rose said.

Rose also has talked to Tony Clark, head of the players’ union, even though it has no role in his case. Clark said on Tuesday that the whole situation is disappointing.

“Just disheartened that the hit king finds himself in a place where every time you say his name, it’s tied to gambling and the challenges or the situation that has dictated the 25, 26 years away from the game,” Clark said.

Rose is in his first season as a Fox Sports analyst. He also makes frequent public appearances, keeping a high profile during his exile from the game.

It’s led to a lot of choose-your-words-carefully moments in Cincinnati this week. Various baseball figures, including NL manager Bruce Bochy, were diplomatic when asked their thoughts about Rose’s appearance in his hometown.

He’s had a few on-field appearances at major league parks since his ban. For example, baseball gave permission for him to go on the Great American field on Sept. 11, 2010, on the 25th anniversary of his record-setting hit 4,192 at old Riverfront Stadium. He stomped on first base.

His most notable on-field appearance came in Atlanta before a World Series game in 1999, when he was honored as part of baseball’s All-Century team. During that ceremony, reporter Jim Gray asked him about his gambling, leading to some awkward moments.

No surprise questions for Rose on Tuesday at the ballpark located on Pete Rose Way — not Johnny Bench Boulevard, not Tony Perez Place, not Joe Morgan Street. It’s named for Rose.

“It was nice and loud but when Pete went out there, the decibels went up a whole bunch and we expected that,” Larkin said. “Johnny was saying he was glad Pete went last. It was fantastic.”

Frazier was looking forward to seeing Rose get a warm reception.

“It’s going to be awesome, knowing these fans and how true they are to the game and how much they love Pete Rose,” said Frazier, who won the Home Run Derby on Tuesday night. “If you want to get into an argument with somebody from Cincinnati, tell them that you don’t love Pete Rose. It’s like saying something about your dad.”

Even though he’s never played in Great American, his fingerprints are all over the ballpark. Fans in Rose jerseys dotted the stands on Tuesday. The team’s adjacent Hall of Fame includes Rose prominently in the displays.

A rose garden just outside the ballpark marks the spot where his record-breaking hit landed at old Riverfront Stadium.