With All-Star Game week of excitement completed, Reds must decide on whether to buy or sell 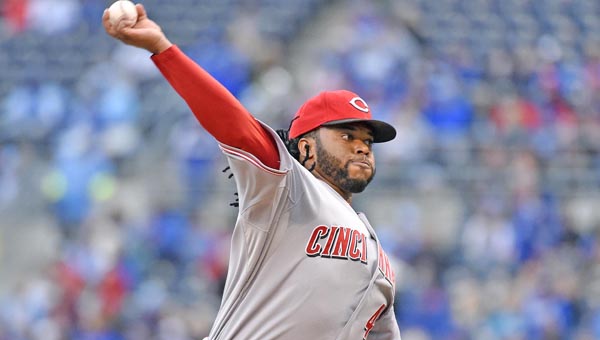 CINCINNATI (AP) — Todd Frazier won the Home Run Derby with final-swing drama. Aroldis Chapman blew ’em away in the ninth inning. Even the rain stayed away, moving through town without interrupting the biggest moments of the All-Star Game.

Now, even as Cincinnati Reds fans enjoy the successful festivities, it’s time to trade the afterglow for the glum.

The Reds enter the second half of the season looking to trade two of their best pitchers — yeah, including Chapman and his 100 mph heat. They’re headed for another grim few months, well out of contention and stuck with several big contracts that leave them little wiggle room for starting over.

Who will be the first traded? Who will take his place? How bad will it get in the second half?

“We can’t be thinking about what’s going to happen or anything else,” Frazier said.

The challenges are much different from the All-Star logistics that went extremely well in the city where pro baseball began.

“It is something that is part of the game but out of my control,” said Chapman, using a line that reflects the mood around town.

The city put a lot of effort into looking good on the international stage. Things went well overall, with few glitches. The highlight was Frazier’s win in the derby on Monday night, when a full stadium exulted over his three rounds of last-swing homers to take the title.

The one potentially awkward moment — having banned hits king Pete Rose introduced on the field as part of Major League Baseball’s Franchise Four promotion before the game — didn’t detract from the night.

Although a still-tired Frazier went 0 for 3 during the AL’s 6-3 win on Tuesday night, Chapman pitched the top of the ninth and fanned all three batters, hitting 103 mph with his fastball. It was a bittersweet moment — he could be dealt later this month, along with starter Johnny Cueto.

Chapman avoided an arbitration hearing by agreeing to a one-year contract worth just over $8 million in February.

Although fans love to see him close out games with his dominant fastball, he’s become an expensive luxury on a losing team. The Reds are 39-47, three games ahead of last-place Milwaukee in the NL Central.

Cueto won 20 games last season, but is finishing a four-year, $27 million deal. The Reds aren’t able to meet his demands for a new deal, so he’s almost certainly gone by the end of the month.

Several teams have scouts paying close attention to his health. Cueto missed a couple of starts because of an inflamed elbow and got a few extra days between starts before the All-Star Game. He’s 3-2 with a 2.36 ERA in seven starts since the elbow problems began.

He started last Sunday in Miami and was taken out after only five innings and a season-low 68 pitches of an 8-1 loss. Teams will want to make sure he’s healthy enough to help them before committing to a trade.

The Reds are prepared to go the rest of the season with a rotation populated by rookies and an everyday lineup that’s missing injured catcher Devin Mesoraco and shortstop Zack Cozart.

So, they might as well savor those All-Star moments as long as they can.

“Everything here was nice, really pretty,” Chapman said. “I think the fans should be happy with what they saw here.”

One notable change already: Frazier has become the face of the franchise.

Since Joey Votto won the NL’s Most Valuable Player award in 2010, he’s been the team’s most recognized player. Plus, Votto got a 10-year, $225 million contract extension through 2023. But he’s been hurt in recent years and didn’t come close to making the All-Star team.

Frazier’s dramatic home run derby title provided the Reds’ best moment of 2015 and one of the most unforgettable nights in franchise history.

“Spectacular,” Frazier said. “I can’t say enough about the fans, how they treated me.

Trade rumors are exactly that: rumors. There is a lot of speculation about whom the Cincinnati Reds will trade before... read more