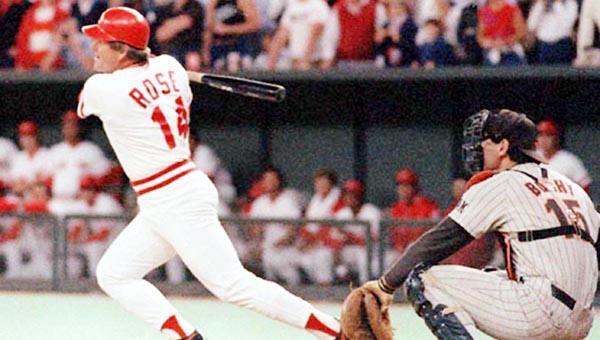 Cincinnati Reds’ great Pete Rose had 4,256 hits, the most in the history of baseball. His hit total is among the records considered unbreakable. (Courtesy of The Cincinnati Reds.com)

These are impressive records, and extremely unlikely to ever be approached. Although for my money, the common answer that perhaps comes closest to this unassailable standard is Cy Young’s career tally of 511 victories.

Even that benchmark, however, fails to surpass another individual milestone. It’s underrated and invariably gets overlooked when the subject of unmatchable records is brought up, even in this era dominated by stat geeks and sabermetrics.

I felt that the slow sports news cycle known as the All-Star break would be the perfect time to call everyone’s attention to one of the forgotten performances in the history of professional baseball.

Ladies and gentlemen, I submit for your approval, the 1972 season of Steve Carleton.

For younger baseball fans who may not know the name, Carleton pitched in the majors from 1965-1988, spending most of that time taking the mound for the Philadelphia Phillies. Nicknamed “Lefty,” he finished his Hall-of-Fame career with 4,136 strikeouts (fourth all-time behind Nolan Ryan, Randy Johnson and Roger Clemens), 329 wins (second all-time among southpaws), and two World Series rings, from 1967 and 1980. Two years later, he became the first pitcher to win the Cy Young Award, given to the league’s best pitcher, for a fourth time.

Carleton also led the majors in wins with 27 for a Phillies team that only won a total of 59.

Read that sentence again, baseball fans; slowly, and let those numbers sink in. That’s right. The 1972 Phillies finished 59-97, the worst record in the National League and 37½ games behind first-place Pittsburgh, and Steve Carleton won 27 of those games for them, representing 45.8 percent of their overall victory total.

Let me put it another way. Carleton’s win-loss record was 27-10, a .730 winning percentage. Thus, the rest of the Philadelphia staff combined to go 32-87 (.269). Extend that percentage out to a full season, and one can make the case that those Phillies would have won 17 fewer games if they didn’t have Carleton.

To realize just how simultaneously extraordinary and obscure this achievement is, the standard that Carleton surpassed was set way back in 1901 by Frank George “Noodles” Hahn — remember him? — who won 22 games for a Cincinnati Reds team that finished 52-87.

No one has approached Carleton’s percentage since. And given the way that baseball has evolved, no one ever will.

In 1972, every major league team used a rotation of four starting pitchers. That meant that men like Carleton, if they stayed healthy, would get at least 40 opportunities to earn victories. Today, every team uses five starters, and some organizations are now even discussing moving to a six-man rotation.

Relief pitching was in its infancy, and the concept of “middle relievers” — a group of pitchers that work the 7th and 8th innings, sometimes facing just one batter each, in order to bridge the gap between a team’s starter and its closer — was still two decades away.

The overall effect has been to distribute a team’s victory total over as many as a dozen pitchers, whereas in Carleton’s day, a team’s four starters could be expected to combine for around 90 percent of its wins. Remember, in 30 of his 41 starts during the 1972 season, Carleton pitched the entire game. No one was going to get the decision but him, and he did get tagged with 10 losses.

That’s 37 decisions over the course of the campaign. Today, a pitcher is considered to be a workhorse if he starts 30 contests, and since he is often pulled after six innings or so to make room for a middle reliever, he can easily factor into the final decision fewer than 20 times.

To approach Carleton, the first thing a pitcher in today’s game would need to do is to make virtually every one of his starts end in a victory. The second thing would be to manage to do this on a historically-bad team.

Consider that there have been only three pitchers in the past 37 years who have won 25 games or more in a season — Ron Guidry in 1978, Steve Stone in 1980 and Bob Welch in 1990 — and in each of those cases, their respective teams finished with at least 100 victories.

The standard for wins in a single season since then is 24, set by Detroit’s Justin Verlander during his MVP season of 2011, when the Tigers went 95-67.

For Verlander to have outdone Carleton, those same Tigers would have had to have gone 52-110. Only two squads since 1991 have finished a season with that dismal of a record, the 2003 Tigers and the 2013 Astros, and the most victories any individual pitcher on either one of those teams compiled was nine.

As I said, Lefty’s mark is untouchable; every bit as untouchable as the more celebrated and hallowed records mentioned earlier, but it is barely remembered. It’s time that casual fans, statisticians and pundits alike begin to appreciate it and, in so doing, help save it from the dustbin of history.