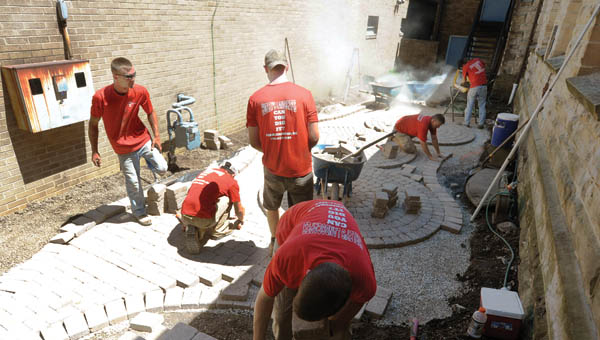 Employees from Hurley Landscaping and Design, landscape the garden space behind the church.

The garden at Christ Episcopal Church is almost ready. Now what it needs is the people to come to enjoy it.

“We need to put a sign out to come in,” said the Rev. Sallie Schisler, priest-in charge. “Something that will invite people in.”

The church’s garden on the corner of Park Avenue and Fifth Street is the latest in a series of pocket parks Ironton In Bloom volunteers are attempting to create.

Created by Bob Hurley Landscaping and Design of Wheelersburg, it features the design of three circles signifying the Trinity in the paving along with ground cover and small trees.

Other pocket parks IIB have supported include one at Memorial Hall to be used as a rest area for proposed walking trails. In April IIB was given a line item in the city budget of $3,000 as part of what it calls a downtown streetscaping project, as opposed to receiving a donation from the city as it has in the past.

On May 20, Mayor Rich Blankenship approved two requisitions for purchases for the organization. One was for the maintenance of seven pole planters at Third and Center streets and at the Fourth Street fire station for $1,470.

The second was for maintenance of nine flower pots at Etna Street Park for $1,890. The additional $360 was covered from the mayor’s contingency fund that is used to pick up costs for different events in the city.

Schisler wants to invite downtown clergy to come to a special ceremony.

“We can make it a real dedication that the community is welcome to come and sit and pray,” she said.