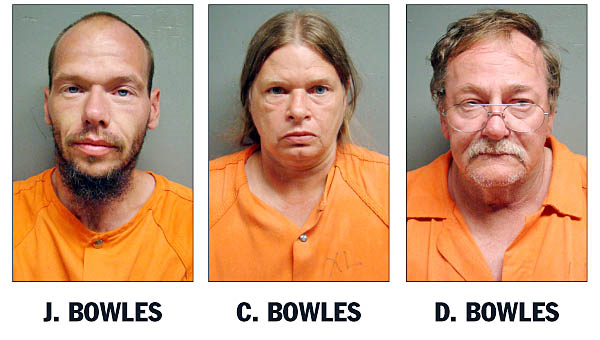 SOUTH POINT — Two Good Samaritans stepped up to the plate when they saw a scuffle between an alleged drug trafficking suspect and a Lawrence County Sheriff’s deputy.

Knowing there was a warrant for James P. Bowles, 31, of South Point, a deputy made a traffic stop on the vehicle Bowles was driving.

“He resisted arrest,” Lawrence County Sheriff Jeff Lawless said. “They saw the officer struggling with him on the ground and the passersby assisted.”

Bowles’ arrest followed the execution of a search warrant at the home of David Rick Bowles, at 3954 County Road 55 or Middle Leatherwood Road, South Point. Bowles, 60, is the father of James Bowles. The raid was at approximately 6 p.m. Wednesday by the Lawrence County Drug and Major Crimes Task Force, the sheriff’s office and the Coal Grove Police K-9 unit.

“We had been working on this for several months and have received complaints from numerous neighbors about the high volume of traffic,” Lawless said.

At the residence law enforcement found approximately 40 grams of Schedule I drug Alpha PVP with a street value of $10,000; several digital scales; packaging material; $20,000 in cash and 40 firearms including handguns and assault rifles. There were also packing slips and order forms from China, allegedly for Alpha orders; cell phones, computers and tablets.

“From all the intelligence we have had over the last several months, this individual (David Bowles) was one of the main suppliers of this drug,” Lawrence County Prosecuting Attorney Brigham Anderson said. “He was getting it from China. It is a speed type drug. It makes people very paranoid.”

Ferris is facing an outstanding warrant.

More charges are expected to be presented to the grand jury next week, according to the sheriff.

Lawless commended the pair who assisted the officer.

“This could have ended with an officer being hurt,” Lawless said. “I appreciate their help.”