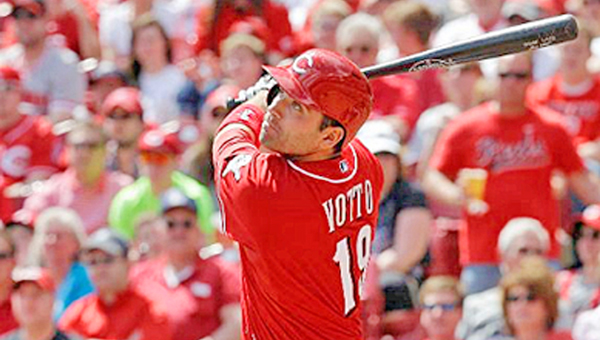 Cincinnati Reds’ first baseman is the team’s hottest hitter heading into the weekend series at Colorado. Votto reached base nine times during Wednesday’s doubleheader against Chicago to make him the first Reds player to accomplish the feat since Pete Rose did it July 2, 1976. (Courtesy of The Cincinnati Reds.com)

CINCINNATI — The Cincinnati Reds and first baseman Joey Votto are going in opposite directions.

The Reds have fallen behind St. Louis by 17 and one-half games in the National League Central Division and are a mere one game out of the cellar ahead of Milwaukee after losing six of their last nine games.

On the other hand, Votto has reached base safely in 13 straight games and 82 of 92 games this season. He currently ranks third in the National League with a .413 on-base percentage and is fourth with a .925 on-base-plus slugging percentage.

Votto led the league in on-base percentage from 2010-13 before he was beset by injuries.

“I’ve been working with (hitting coach) Don Long to make some adjustments to what was a flawed swing,” Votto said on Wednesday. “I’m still kind of working through it. I feel like I’m headed in the right direction. There are some subtle adjustments to make.”

Votto watched some film of his at-bats but he said he was aware of the flaws by the way he was hitting the ball.

“The ball speaks for you,” said Votto. “The way the ball comes off the bat, timing with the pitchers, the way you feel at the plate. That does plenty for you. Then, after that, you go to the video or have discussion with the right people and work from there.”

The Reds split a four-game series with the Chicago Cubs including a doubleheader split on Wednesday.

However, Votto reached base nine times during the day-night doubleheader to become the first Reds player to accomplish the feat since Pete Rose did it on July 2, 1976, against the Houston Astros.

He is only the fifth player in the past 20 years to reach base nine times in one day and the first since Robinson Cano turned the trick in 2010.

“Even his outs are hard line drives all over the field,” said Reds’ manager Bryan Price.

But Cincinnati begins a weekend series in Colorado on Friday night and Votto as well as the Reds have struggled at Coors Field recently.

The Reds hope to turn things around on Friday as they send rookie Anthony DeSclafani to the mound. He is 5-7 with a 3.99 ERA. DeSclafani has a 5.69 ERA in nine outings at offensive-friendly Great American Ballpark but he has a 2.53 ERA in nine road games.

However, the rookie faces a big challenge in the Mile-High City of Denver where the Rockies rack up the runs.

Votto isn’t alone with his offensive struggles at Coors Field. Marlon Byrd is batting .225 in 18 career games and Todd Frazier is only 3-for-28 in seven games.

Frazier comes into the game hitting .279 with 26 home runs, 63 RBIs and a league-leading 28 doubles.