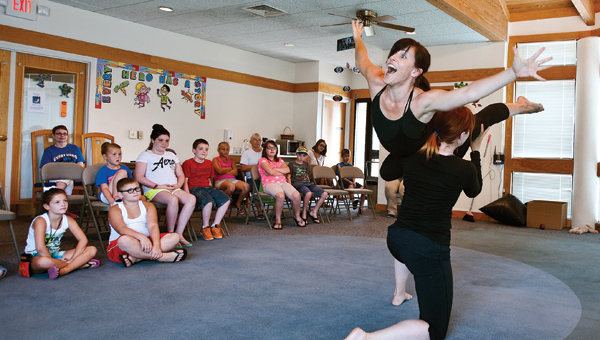 Members of the Jeslyn Dance Gallery perform for eventgoers Wednesday at the Briggs Lawrence County Public Library South Point Branch. As part of the summer reading program performances were given to the books “Ten Rules to being a Superhero,” “Michael Recycle,” and “Do Superhero’s Have Teddy Bears?”

The gallery dancers have performed at the summer reading finale for the past six years and have incorporated the theme of the summer reading programs into each of their performances. This year’s theme was “Every Hero has a Story.”

“We are really illustrating the books,” said Logan. “Every single year we’ve based it off a book.”

“We just try to make it super creative and really big,” said Maggie Jackson, dancer and narrator for the performance.

The dances performed this year were based off of the children’s books “Michael Recycle,” “Do Super Heroes Have Teddy Bears?” and “Ten Rules of Being a Super Hero.”

Young people giggled as Logan danced around the room with a broom in her hand and dusted around their feet while acting out rule No. 2 from “Ten Rules of Being a Super Hero.”

Smiles lit up the faces of the young people as they watched Conley and Logan strike a super hero pose as a super hero soundtrack played.

The children joined in the dancing when Logan asked if any of them wanted to dance along.

Flying across the floor with their hands raised in the air, the young people followed the lead of Logan, Jackson, and Conley as they performed the role of super heroes.

The children leapt across the floor and danced to the beat when the theme song for “Do Super Heroes Have Teddy Bears?” began to play.

With a round of applause for being great super heroes, the dancers and children completed their day’s work of being super heroes.

The young people voiced their approval for the entertainment at the program finale.

“They were really good,” said Audrey Beth Wiles, whose favorite part of the performance was when the dancers acted out the role of Michael Recycle.

Ameeya Johnson said she thought it was cool how the dancers incorporated super hero books into the dances.

“I liked it,” said Johnson.

Ameeya’s grandmother, Dorothy Johnson, has brought her grandchildren to the summer reading program for several years and said the dancers always do a good job closing out the program.

Ten-year-old Ellie Gill said her favorite part of the performance was the teddy bear song and liked that the dancers used book themes for their performances.

“I love the fact they incorporate books into the performance,” said assistant children’s librarian Jan Gullet. “The kids really enjoyed it.”