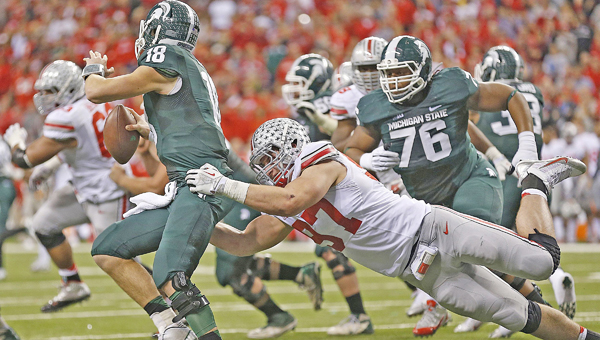 CHICAGO (AP) — Ohio State will face one of its toughest tests of the season without its best defensive player and three talented receivers.

Meyer did say the violations had nothing to do with players breaking any laws. He said he has known for a while that the suspensions were coming and that he is “100 percent supportive” of the policies.

Ohio State opens its season Labor Day night in Blacksburg, Virginia, looking to avenge a 35-21 loss to the Hokies. The Buckeyes have won 13 straight since.

Bosa had 13 1/2 sacks as a sophomore and enters his junior year as one of the top NFL prospects in college football.

Meyer said the Buckeyes will look toward sophomore Jalyn Holmes and redshirt freshmen Sam Hubbard and Darius Slade to help pick up the slack for Bosa.

Marshall was second on the team in receptions as a freshman with 38 and was also the team’s best punt returner.

Wilson and Smith combined for 41 catches for 555 yards.

The Buckeyes were ranked No. 1 in the preseason coaches’ poll released Thursday and are likely to be top-ranked in The Associated Press preseason Top 25 when it is released Aug. 23.

Ohio State brings back most of its key players from last year’s team, which bounced back from a September loss to the Hokies in Columbus to win the first College Football Playoff. Bosa might be the best of the Buckeyes. He had 21 tackles for loss last season, including a game-ending sack in overtime against Penn State.

Marshall was a versatile playmaker the Buckeyes lined up all over the field, including at quarterback at times. Wilson, a junior, plays a similar role for Ohio State. A foot injury against Michigan State in November cut his season short and kept him out of spring practice.

Smith, a senior, is in his second season with Ohio State after transferring from junior college.

The Buckeyes will likely have a new addition at H-Back when preseason practice starts in August. Braxton Miller has said he will switch from quarterback to receiver, which could help make up for the losses there.

Meyer said the transition of Miller to receiver was a plan B that’s been in the works for about a month and a half. The coach he will personally work with Miller when preseason practice starts before it the staff determines the best way to use the two-time Big Ten player of the year.

“He’s one of the best athletes I’ve ever coached,” Meyer said. “He’s got an incredible first step. Above all else, you say it’s time to win or lose time, and he’s not going to lose.”