Rhoades back on the court after recent heart surgery 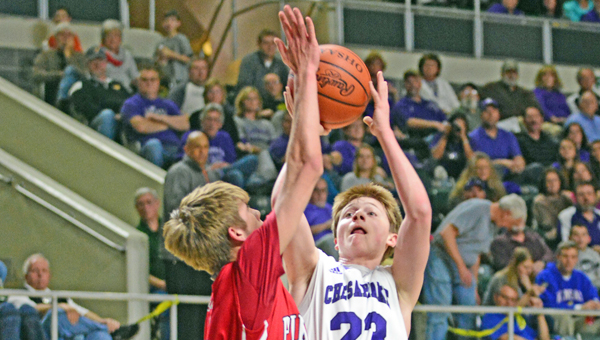 CHESAPEAKE — Watching Gage Rhoades, most coaches and fans would say he plays with a lot of heart.

For the Chesapeake Panthers’ senior standout, he’s just glad his heart is letting him play again.

An episode back in January that had Rhoades suffering from headaches for two or three days followed by a racing heart caused a slight panic among Gage and his parents, Kim and Ryan Rhoades.

“I was sitting at home with my dad just watching TV and my heart started racing. Luckily my mom mentioned that the ER in Ironton (St. Mary’s Medical Center). They ran an EKG and they found something.”

The diagnosis was RVH — right ventricular hypertrophy — and doctors told Gage and his parents that he could never run again.

Shaken by the findings, the Rhoades went for a second opinion at King’s Daughters’ Medical Center that same night. There the staff ran a chest X-ray and an EKG and the result at that time said, “it was perfect.”

“My mom wanted a third confirmation, so we went to St. Mary’s in Huntington for an Echo and my right side was moderately dilated,” said Gage.

On the following Thursday, they went to Healthcare Information Management Group (HIMG) in Huntington and the report was RVH.

The doctor took Ryan Rhoades into the hallway and told him Gage needed to stop and that he would never be able to run again.

“We were all pretty devastated. I was in the floor crying,” said Gage.

Ryan Rhoades was tired of all the different diagnosis, so he instantly got the number for the Cleveland Clinic to find our just how soon they could get an appointment.

The speedy, quick, sharp-shooting All-Ohio guard missed several games as he went from station to station for tests, but he said Panthers’ head coach Ryan Davis was nothing but supportive.

“Coach Davis was really encouraging all the time. He said don’t worry about things you can’t control. That’s the main quote I’ve kept in my mind. God had a plan for me and six days later we went up there at five in the morning and had various tests including two MRIs,” said Gage.

After an exhausting 12-hour day, Gage was told he could play but he would eventually need surgery.

Doctors told the Rhoades that Gage didn’t have RVH, but instead Atrial Septal Defect, or ASD. “What’s that?” asked Ryan Rhoades.

The doctor explained that blood flows right or left and Gage had too much going to the right.

Given the okay to return home and play, Gage didn’t have to be told twice.

He returned to the Panthers’ lineup and helped the Panthers win a share of the Ohio Valley Conference and a berth in the Division III regional semifinals.

A three-year starter, Rhoades was named a first team Division III Southeast All-District selection last year as he averaged 19.1 points, 3.3 rebounds and 2.4 assists in leading the Panthers to a share of the Ohio Valley Conference title and a berth in the district finals.

He capped the year off by being named All-Ohio Special Mention and was about to focus all his attention on his senior year.

Gage wanted to postpone the surgery until after graduation so that he could have his senior year uninterrupted. Ryan Rhoades called the Cleveland Clinic to request a later date but the doctor did an about face.

“Well, they said we really don’t want to. I said that’s contradictive to what you said. The doctor — one of the top five cardiologist in the nation — said, ‘there is a slight, slight hair of a chance he could have a stroke. Do you want to live with that?’ I said we’ll see you May the 8th.”

Just six weeks after Gage’s surgery, doctors gave him the green light to return to the basketball court. Gage didn’t just return to his workouts, he attacked them.

“When I went up the first time, I just accepted I wasn’t going to be able to run, so maybe I could inspire kids,” said Gage.

But once he had the surgery, there was never any doubt in his mind.

“I knew I was going to play again. I had so much motivation to get back. I was at home two or three weeks later and I didn’t have any pain and I was out dribbling and jogging slightly. I just couldn’t sit at home. It was driving me nuts,” said Gage who actually came home from the Cleveland Clinic and began working out at 2 a.m., then headed for a shootout at Marshall University later that day.

The surgery had a huge affect on Gage, and not just from a health standpoint. Until the surgery, Gage was only breathing about 80-85 percent his whole life because he had so much blood going into this lungs.

“So I really hadn’t got to play organized basketball at 100 percent yet. I wasn’t my healthiest until now,” said Gage.

“I feel great, not only physically but mentally now that it’s all over. Plus, I’ve gained weight from it, I feel a lot stronger and I’ve gotten taller now that the blood flows through my body.”

The improved health and other affects of the surgery rekindled Gage’s plans to play college basketball.

“I’m hoping to get a basketball offer or walk-on at Marshall or possibly Virginia Tech, Florida Atlantic or David Lipscomb,” said Gage who has a 3.9 grade point average. “If that doesn’t work out, I’ll still go to school for Exercise Science.

Ryan Rhoades said that some insight from an unexpected source actually turned the family in the right direction.

Dr. Mathew Harris — who practices internal medicine and pediatrics — happened to live in the neighborhood and was jogging past the Rhoades’ home.

“He had nothing to do with this field (cardiology). Everyone said Gage had RVH and (Harris) said, ‘he doesn’t have RVH.’ I said why? He said, ‘he’s never had symptoms. He never has trouble breathing. He’s been running like this all his life.’

Gage said that if he is unable to fulfill his goal of playing college basketball, it won’t be as devastating as he might have thought prior to his ordeal.

“I want to inspire as many kids as I can. If it wasn’t for God, none of this would ever happen. It was a hard time in my life and I was going through a lot of pain, but it brought my family closer together and my friends closer. It just shows that when you think everything is wrong, God is going to have something good come out of it,” said Gage.

CHICAGO (AP) — The College Football Playoff has turned strength of schedule into a constant talking point, with each conference... read more