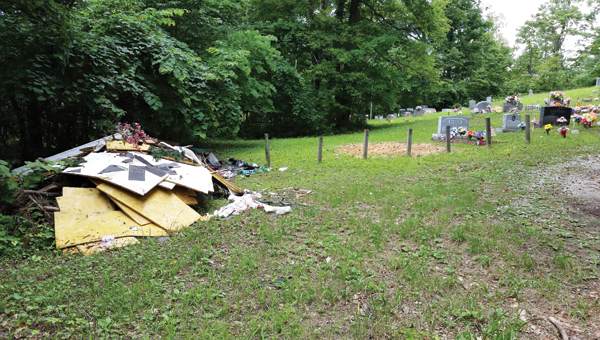 Piles of trash were dumped at Ross Cemetery in Kitts Hill in June. The person responsible was cited to court by the Lawrence-Scioto Solid Waste Management District.

During an average year, the Lawrence-Scioto Solid Waste Management District handles about 120 criminal cases of open dumping and littering. It’s only the beginning of August and the recycling and littering prevention agency has already seen more than 100.

Several of those cases result from people taking advantage of the free recycling sites throughout the county.

“We’re seeing an increase of people … a total disregard for our recycling containers,” said Dan Palmer, director of the LSSWMD. “There are signs that specifically state what can be recycled.”

Palmer said people dump anything from household trash to toys to construction debris like roofing and vinyl siding.

For those who flout the rules, Steven Hileman, enforcement officer, will investigate the individual cases and seek prosecution, usually with a conviction.

“I have been, this year, very busy,” Hileman said. “It’s been nonstop, but I love my job.”

Hileman said he has a zero tolerance policy when it comes to littering, even if it’s trash thrown from a car window or someone walking down the street.

One recent investigation into trash left at a cemetery ending with one man serving a week in the county jail and a $200 fine.

“Through investigations he was identified and he admitted to me,” Hileman said.

White was charged with an unclassified felony of open dumping, which was reduced to a third-degree misdemeanor count of littering.

In addition to jail time and a fine, the man was sentenced to one year of probation and community service. He was also given 10 days to clean the site and provide receipts that he used a licensed landfill to dispose of the waste.

In another case, a Proctorville man was charged with operating an illegal landfill.

“We got a complaint that someone in Proctorville was operating a landfill,” Hileman said. “He was apparently letting people come in and dump their stuff.”

The man also attempted to demolish a home on the site and bury it.

Cornell cleaned the site and his charge was reduced to M-3 littering, as part of a plea negotiation. He was also ordered to pay a $300 fine and court costs and he was sentenced to probation.

In April, a Proctorville man was cited to court for dumping seven helium tanks in the recycling bins at Foodfair.

Hileman said witnesses saw Bruce Ward, 39, of 14163 State Route 7, dump the tanks, which allowed them to be removed before being picked up and compressed by a Rumpke crew.

Ward was sentenced on a third-degree misdemeanor count of littering and was sentenced to one year of probation, court costs, 60 days of jail suspended and 100 hours of community service. He was also ordered to pay $270 restitution to the solid waste district, which had to pay for the disposal of the tanks.

A South Point man was charged with littering after he dumped household items, fencing and other debris at the recycling bins at Sam’s Club in June.

In a case that resolved last month, a husband and wife were convicted of dumping trash in the Foodfair recycling bins.

Hileman and Palmer urged anyone who sees someone dumping litter in the community to contact the solid waste office to report it.

“Anytime anyone sees anything, use your phone and take a picture,” Hileman said. “It remains confidential. They don’t even have to give their name.”

Getting ready for a new year

With the start of another school year nearing, families with students will have opportunities to receive school supplies through giveaways... read more