No cats; no catcher 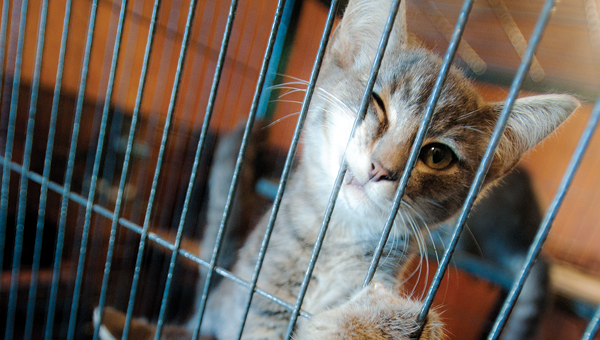 Cats and kittens are at the Lawrence County Animal Shelter including the cages inside the garage.

Less than two months after it opened, the cat shelter at the Lawrence County Animal Shelter has stopped taking in cats, but not because there’s no room at the inn.

Instead, an argument that erupted between county dog warden Bill Click and humane society treasurer Alberta Wise prompted Click to change his policy and resign his job.

Wise had come to the county commission’s workshop on Tuesday to present a proposal that the county re-instate a humane officer following numerous complaints about animal abuse.

After her presentation she and Click began arguing about the fee the shelter charges to take in cats and that Wise had stopped giving away free spay and neuter certificates to anyone who adopts an animal from the pound.

“I have put in 27 years of service, given my heart to the county,” Click said. “I am sick of politics. To have this kind of flak from the humane society, that is the last straw.”

Housing and caring for dogs at the shelter is funded from the annual dog tags owners are required to purchase and adoption fees.

However there is no dedicated source of revenue for sheltering cats except through donations. To cover that cost the shelter was charging $15 to take in an unwanted cat and $7 for a kitten. Adopting them out costs $15.

According to Click, Wise objected to the fee and made a public issue about the shelter’s policy.

“I put my job on the line to help these cats,” according to Click, who said in the Ohio Revised Code the dog warden’s duties do not include taking in cats. “I have had nothing but crap from the humane society and other people. If you have a cat, I can help you. You have to pay a small fee, but that cat is going to get a chance at life.”

About two years ago, the county shelter was cited as having one of the highest kill rates of dogs in the state. Then the recently formed Friends of Lawrence County Dog Pound began an out-of-county adoption program for dogs.

As of Wednesday, all 28 cages designated for cats were filled, according to Melissa Nicely, pound keeper.

“We got to the point we had more cats than we did dogs,” Nicely said. “We have never been funded for cats. We knew what we were doing by putting up the building, the cost associated with it. We had people coming all the way from Portsmouth. Nowhere else was taking in cats. Now we don’t take in cats because of yesterday.”

The commission will pick Click’s replacement.

“I think we have a succession plan in place,” commissioner Bill Pratt said. “Ronnie Hatfield has worked there for years. He would be the logical successor of Bill Click, if he indeed leaves.”

Calls made to the phone listing for Alberta Wise were not answered nor was a message left on the voicemail of her daughter-in-law, Diana Wise, returned.