Rally winds down for another year 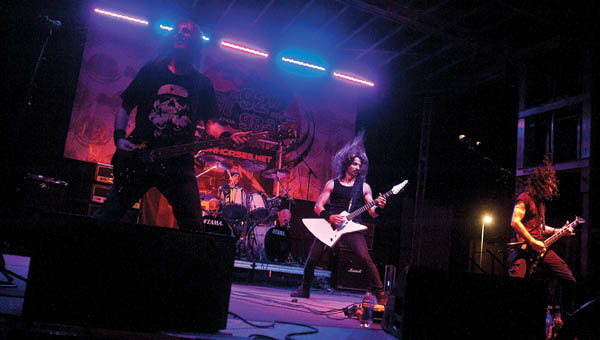 The Four Horsemen performed for the crowd Friday.

Saturday was the second time Larry Burns of Teays Valley, took in Ironton’s Rally on the River.

Riding motorcycles all of his life, Burns said “it’s the freedom of it all.”

No matter the weather, he jumps on his bike whenever he wants.

Vendors lined the area blocked off on South Second Street, selling anything from vapor cigarettes to physical therapy machines. The rally kicked off on Thursday night with a good start at the box office, where 100 tickets were sold in four hours.

However, by Saturday some vendors were saying traffic was slower than what they were anticipating. In fact, one vendor said some of his colleagues had already packed up.

One regular to the rally is Bikers for Christ, who have brought their ministry to the rally since its inception.

“This gives us the opportunity for all we do,” Larry Franz of Ironton, said. “We tell everyone about the Gospel of Jesus Christ. We pass out Bibles. They’re free. Salvation is free.”

Franz takes his crusade to the highways estimating he puts in between 8,000 to 10,000 miles a year on his bike.

“We have people saved every year,” he said.

Rally on the River officially underway

Pop Evil performs during the 2015 Rally on the River in downtown Ironton.   Following a pre-party Wednesday night at... read more