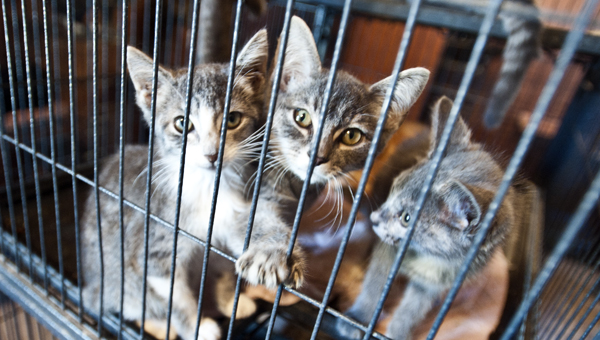 Felines wait for adoption at the cat shelter at the Lawrence County Animal Shelter.

A week after a dispute between the dog warden and the humane society prompted a ban of cats at the animal shelter, the pound is back in the feline biz.

As of today the shelter will again take in stray and unwanted cats with the goal of finding them homes.

“The public demand was so high,” Melissa Nicely, pound keeper said. “We have had so many people calling trying to bring cats in. We have been flooded in the last week. We didn’t realize we offered such a great service. We’ve had 40 to 50 people calling or coming in.”

The dispute between Bill Click, dog warden, and Alberta Wise, treasurer of the county humane society, centered on Wise’s complaint that the shelter charges a fee to take in a cat and her refusal to continue offering free spay and neuter certificates.

“We have not been told anything about her doing that again,” Nicely said.

The annual dog tag required by pet owners finances that side of the shelter, but there is no designated fee for cats.

To provide that funding the shelter charges $15 to take in an adult cat and $7 for a kitten. To adopt out is another $15.

Right now there are 30 cats housed in the new shelter especially built for them.

“And we have two mamas with tiny babies,” she said. “One had six babies and one had four. They are too little to be adopted out.”

Finding homes can be harder for cats, Nicely said, as the shelter only has three rescue organizations that handle them.

“That is versus over 50 rescues for dogs,” she said.

The pound continues to owe on the new cat home, with a $200 a month payment scheduled for the next two years. Other expenses include a typical bill of between $50 and $75 a week for cat litter.

“And we could use any old towels and blankets we could use on the bottom of the cages,” Nicely said. “When it gets cold, they cuddle. And any type of cleaning supplies.”

The shelter is open 10a.m-4 p.m. Monday through Friday and noon-4 p.m. Saturday.

Is it marriage or not?