Art on exhibit at Briggs 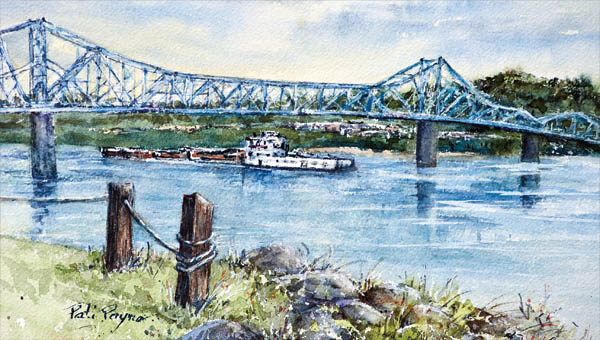 The current exhibit is on display until Sept. 5.

Highlighting the local landscape and images in nature, the 18 paintings and photographs on display at the Briggs Library in Ironton illustrate the talent of local artists in the Ironton Artists Association (IAA).

“The idea of having the exhibit…is for people in Ironton is to see original (art work),” said Pati Payne, founder and treasurer of the Ironton Artists Association. “I think it’s nice for Ironton and nice for the art club.”

While the IAA has shown at the library in the past, this is the first year the group has had multiple exhibits throughout the year. The IAA has been rotating art in the exhibit every six weeks or so, said Payne who has several pieces on display at the exhibit. The current exhibit is on display until Sept. 5.

“For years we’d just have a spring exhibit,” said Payne. “This is the first year we’ve had things continuously.”

The art exhibit is a way to show the community the work of local artists and to give them a chance to purchase local artwork.

“I hope they’ll make a special trip in to see it,” said Payne. “I want to publicize that the library is there.”

Since the IAA doesn’t have its own art gallery, Payne thought that having an exhibit at the library would be a good way for the artists to show their work.

“I thought it would be great to recognize them and get people to see their art,” said Payne.

Having IAA art on display at the library is something Payne hopes will continue.

“As long as Briggs will let us, I would like to continue rotating shows,” said Payne. “I hope to keep showing the work of good artists.”

Pattie Del Choccolo, whose paintings are in the exhibit, hopes that the exhibit will be a way to familiarize people with the style of painting she practices, Old Master style, a style she said isn’t as popular as it used to be.

“I think it’s just good for people to see that type of art,” said Del Checcolo.

For IAA president and artist Clarice Kumlien, sharing art with people is something she likes to do.

Kumlien believes that there are benefits to having art on display in the library.

“Having the exhibit just adds something to (an individual’s) visit,” said Kumlien. “I think it inspires people to maybe pick up a pencil.”

When it comes to finding jobs and transportation around the Tri-State, the Ironton-Lawrence Community Action Organization (CAO) aims to offer... read more