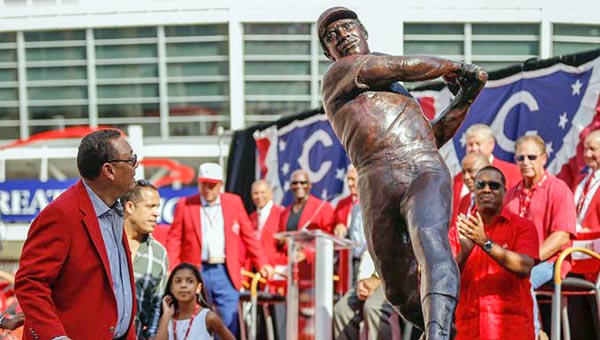 Cincinnati Reds’ Hall of Fame first baseman Tony Perez (left) admires his own statue unveiled by the franchise on Saturday during a ceremony outside Great American Ball Park. (Photo Courtesy of The Cincinnati Reds.com)

CINCINNATI — It was time to turn the tables on Tony Perez.

Perez had a huge impact on the Cincinnati Reds’ organization for 16 years and its fan base. But on Saturday, the franchise honored him with a life-size statue that had an emotional impact on the Hall of Fame first baseman.

“I been looking for a word to appreciate how I am today. But I can find that none of them feel right. They are too small. I’m emotional right now and you can see it.”

The 73-year-old native of Cuba, Perez spent 23 years in the major leagues, 16 with the Reds. During that time with the Reds, he helped them win back-to-back World Championships in 1975-76 as one of the Big Four that included Pete Rose, Joe Morgan and Johnny Bench.

A seven time All-Star including the 1967 MVP award for his game-winning home run in the 15th inning, Perez was inducted into the Reds’ Hall of Fame in 1998.

But getting a statue in front of the Reds’ Museum proved to be more emotional than he expected despite warnings from teammate and Hall of Fame catcher Johnny Bench.

“The guys are right. It’s a big difference, Johnny, when you get a statue,” said Perez.

Perez then turned to his wife, Pituka, and other family members and fans who attended the ceremony.

“Pituka, you are the love of my life. And being together for 50 years, this year will make it 50 years, and that is something I have to say because she raised my sons and helped me so much,” he said.

“It’s great to see so many fans and the people around me. Thank you to be here and thank you for everything all these years. That’s all I got. Thank you. I love you all. Thank you Cincinnati.”

Former Reds — many on the title teams — converged on Great American Ball Park for the weekend ceremonies along with former Montreal teammate Andre Dawson. They were together on a dais Saturday after the unveiling of the statue.

Rose was only able to attend on Friday due top prior commitments.

“You don’t think about it. When you play the game, you don’t play for statues or anything like that. You just play the game and win,” said Perez.

“This is something special. I really love it. It’s very warm. My teammates, my ex-teammates, seeing my family and all the people around, and the way they treated us in the couple of days, you have to remember all your life.”

Perez began his career in 1960 with the Reds in the minor leagues in Tampa, Fla. He admitted that it was even more difficult for him because he did not speak any English.

“I was lost. I no speak no English — I still (no speak English as the crowd laughed) but — not at all. It was hard. You want to communicate with your teammates. I know how to play the game but I have to learn to speak English. I have to learn how to say, ‘Hey, catch the ball. Say something to the pitcher and say something to my teammates. It’s not easy.”

On his first day in camp, former Reds’ pitcher Johnny Vander Meer was the manager.

“He asked me if I was ready to play and I say, ‘Yes,’ because I only know two words, no or yes. I say yes. I’m not going to say no to a manager. He put me out there and I wasn’t ready. I made two errors and went oh-for-3.”

Bench and Morgan both related stories that gave examples of Perez’s influence on the team beyond the statistics.

Bench recalled the 1972 season when Morgan first came to Cincinnati after a big five-player deal with the Houston Astros.

“Joe came over from Houston and he wasn’t real happy about being here or being traded, but he had a chance and so he’s there. Joe would go oh-for-4 or not get something that day, ‘but he’d come in and (facial gesture of his lip being out in a pouting mood). And the first thing Tony would say is, ‘Joe, you better stop that. You’re going to step on that lip,’ “ said Bench.

“He was the one constant. He was the guy that sorta stirred things up. But it was a stirring up that we all needed. It kept the club loose. It was a labor of love every day for us to come to the ballpark. There wasn’t anything beyond that. We knew that we were all one. I’d strike out and be walking back to the dugout with a man on base and Tony would say, ‘That’s okay. I pick you up.’ And he’d go and pick me up.”

Morgan once uncharacteristically made three errors in the first three innings of a game. During a bathroom break, he found his glove taped to a garbage can with a note that read, “Take this out there with you.”

Morgan was sure Perez wrote the note.

But that wasn’t Morgan’s favorite story. He said that event occurred early in the 1976 season.

“Pete Rose and I got off to a great start. In fact, one of us was leading the league in hitting and the other was second. And we’re standing at the batting cage one day in San Francisco — I’ll never forget this — we’re at Giants’ stadium — Candlestick Park — and me, Tony, Pete and Johnny all hit together every day. I’m standing there with (Perez) and Pete and I are kinda laughing and saying, ‘how many are you going to get today?’ or something like that. We’re making a joke,” said Morgan.

“Tony walked over and he said, ‘You guys all happy. You guys are hitting .420, you’re hitting .425,’ he said, ‘but when the Big Dog starts to hit, that’s when we go to first place.’ And guess what? Two weeks later we’re in first place. And it is true. He knows that’s the truth. Even though he tries to be humble sometimes, he was very confident and he would let you know if something wasn’t right.”

Buckeyes open poll at No. 1