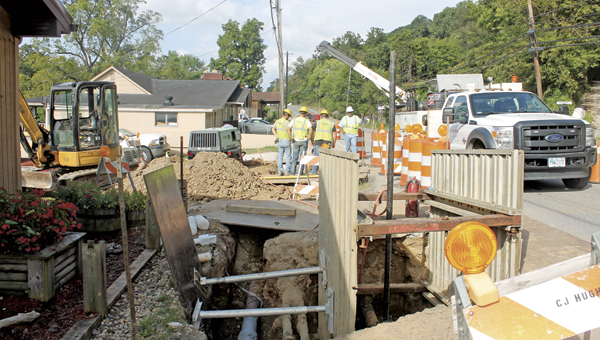 CHESAPEAKE — The streets are getting dug up, but so far traffic is getting through as an extensive drain replacement project in the village is under way.

“They are not affecting traffic on Route 7 now,” said Kathleen Fuller, public information officer for the Ohio Department of Transportation. “We will be affecting traffic at some point when they work closer to the highway.”

Then flaggers will keep traffic moving while crews are out between 8 a.m.-6 p.m. Monday through Thursday.

“Traveling Route 7 is tough,” Fuller said. “It backs up quickly.”

The almost half-million dollar project started at the end of July and is slated for completion by the end of the year.

“It is the reconstruction of the drainage system between State Route 7 and the Ohio River,” Fuller said. “It is fairly well antiquated.”

For some time certain parts of Rockwood Avenue will flood during heavy rains.

The area affected runs from Symmes Creek bridge to just below Bradrick by State Route 243.

“This is within the village and we were enlisted,” Fuller said. “We have been working on it for more than two years.”

Fields Excavating is handling construction while design work was by ODOT designers from Districts 1,5 and 9.