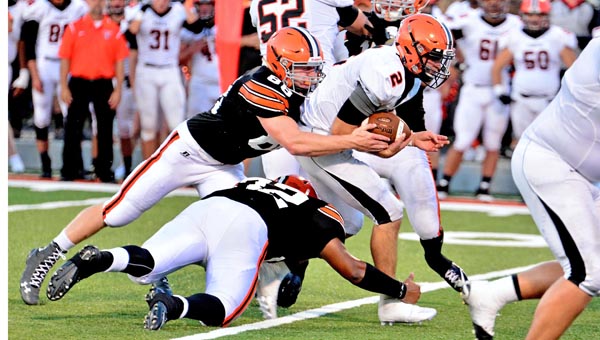 The toughest team Ironton had to overcome in its season opener on Friday was the Fighting Tigers themselves.

Ironton had 92 yards in penalties and failed to finish drives in a 14-6 loss to the Wheelersburg Pirates before a standing room crowd of more than 6,000 people.

“I felt like it was pretty evenly matched. Give them credit. They got the job done,” said Ironton coach Mark Vass.

“But I felt like we were in pretty good position there in the second half and, especially offensively, I felt like there was a lot of self-destruction. Dumb penalties is the best way I can put it which just kills your drive.”

Ironton outgained the Pirates 293 in total yards to 184. The Fighting Tigers had 251 yards on the ground but just one touchdown to show for their efforts.

“It just comes back to execution. You’ve got to eliminate those mistakes. You can’t keep making those penalties that you shouldn’t be making. It’s just basic football.” said Vass.

“What we were doing I don’t feel like they were stopping us completely all night. It was slow and methodical. It was ground and pound and I was committed to it. Give them credit on defense. They’ve got a good defense. It wasn’t going to be easy. We knew that going into it. But we can’t keep making the mistakes we’re doing.”

The Pirates scored on the game’s opening drive thanks mainly to a pair of fine catches by Chasen Burk.

Facing a third-and-12 on the third play of the game, Kyle Davis let fly a pass that Burk had to leap high into the air to make the catch for 14 yards and a first down at the 44.

Burk then made a diving catch that gained 20 yards to the Ironton 1-yard line and set up a short scoring run by Jordan Howard with 7:39 on the clock.

Ironton drove form its own 39 to the Pirates’ 27 but turned the ball over on downs.

Aided by a pair of Ironton penalties, the Pirates got to the Ironton 26 only to be held on downs by the Fighting Tigers’ defense.

Ironton drove to the Pirates 22, but with time running out Jake Isaac was sacked for a 12-yard loss and then threw a Hail Mary into the end zone that was picked off by Burk with 12 seconds left in the half.

The scoring frustrations ended quickly to start the second half as D’Angelo Palladino bolted 57 yards for a touchdown on the second play of the third quarter and it was 7-6. The conversion kick was wide left.

Wheelersburg went three-and-out but Ironton fumbled the punt and the Pirates recovered at the Fighting Tigers’ 41.

Again the defense stiffened on another three-and-out that included a sack by Desmond Young for a 10-yard loss to force a punt.

Ironton got the ball back with 7:09 on the clock began a drive at its own 18 that ate up the rest of the quarter. However, the drive ended at the Ironton 40 due to six penalties for 62 yards.

“You can’t do that, especially the way we were playing You’re getting three or four yards a crack and then maybe a big one in here or there, you just can’t go into first-and-15. Those are just drive killers,” said Vass.

The Pirates then went 62 yards in seven plays for an insurance touchdown. Howard broke free on a fourth-and-3 for a 23-yard scoring run with 9:46 left and it was 14-6.

Ironton got the ball at its own 17 with 3:16 to play and drove to the Pirates 39 behind the running and throwing of Isaac. But the Fighting Tigers were unable to convert passes on third and fourth down and the Pirates took over with 49 seconds.

“Overall I thought the effort was there. We just have to clean up the silly mistakes. I thought our defense played pretty well,” said Vass.

“Early on they had third and long situations and they’ve got talent and No. 8 (Burk) made a heck of a play. We had pretty good coverage. They just made plays when they needed to and you have to give them credit for that.”

Palladino finished with 141 yards on 20 carries to lead the Ironton offense.