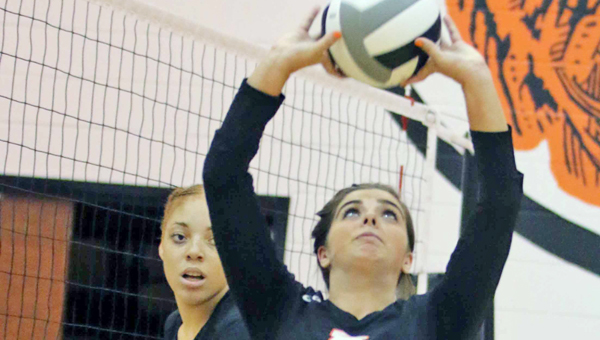 The Ironton Lady Fighting Tigers felt the loss, but it didn’t feel the same as other losses.

Ironton turned in a strong effort before falling to the Portsmouth Lady Trojans in five sets on Tuesday in an Ohio Valley Conference volleyball game.

“No coach wants to lose. However, even though we lost, I think we benefited,” said Ironton coach Beth Freeman. “I saw a growth among them and I watched character develop.”

Portsmouth rolled to wins in the first two sets behind great serving by Andi Queen and Bailey Horsley.

But Ironton rallied in the third set as Jordan Hannan served 10 straight points for a 14-6 lead en route to a 25-20 win.

The Lady Tigers got a combined 17 points from Zakia Lee, Lexi Wise and D’Laynie Keith in the fourth set as they won 27-25.

In the decisive fifth set, Aiden Fields had 3 key points as Portsmouth won 15-11.

“This is a great group of girls and they are so much fun to watch. At times, we play like experienced players and then there are times our youth shines on the court,” said Freeman.

“Alyssia Rowe, Kenzie Cremeens and Ali White didn’t have any big stats, but they all contributed somewhere, somehow in tonight’s match.”

Hannan scored 12 points that included 5 aces and she amassed 29 assists to lead Ironton.

Wise finished with 15 kills and 6 points, Lee had 9 blocks, 4 kills and 10 points, Keith got 9 points and 9 kills, and Kaylin Easterling had 6 points and 5 aces.