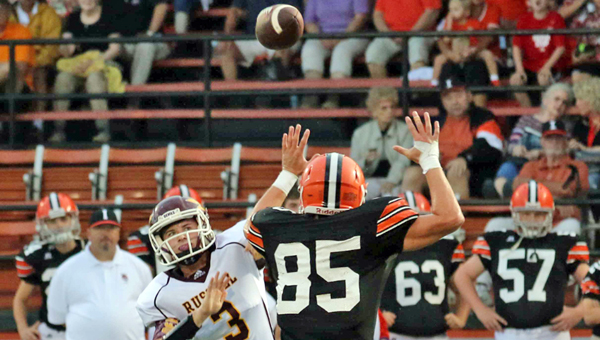 Ironton Fighting Tigers’ defensive end Lucas Campbell (85) applies pressure on Russell quarterback Jacob McKee (3). The game was postponed due to the weather and will be played at 8 p.m. on Saturday.

Now what’s she upset about?

Mother Nature played havoc with area high school football. Mainly due to lightning but then some added rain storms, several local high school games have been rescheduled for Saturday.

Ironton will host Russell at 8 p.m. as they pick up with 7:26 left in the first quarter and no score. There will be no admission taken for tonight’s game. All reserve seating will be still be honored.

Coal Grove is at home to play Lucasville Valley at 7 p.m. Their game never started.

Rock Hill was leading Northwest 8-0 and on the 10-yard line when play was called. The two teams will resume at 3 p.m.

The Alexander at Chesapeake, Fairland at Wheelersburg and Buffalo at Symmes Valley games were played but faced weather delays.

South Point is hosting Rock Creek Academy of Indiana at 2 p.m. in a game originally scheduled for Saturday.