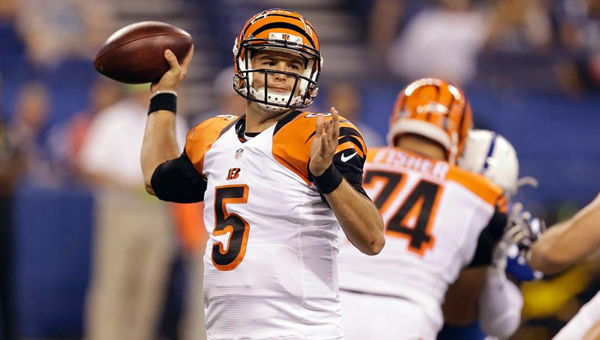 Cincinnati Bengals’ backup quarterback A.J. McCarron had an impressive performance in a 9-6 exhibition win over the Indianapolis Colts on Thursday. (Photo Courtesy of The Cincinnati Bengals.com)

He just couldn’t get Cincinnati into the end zone.

Rookie kicker Tom Obarski made a 28-yard field goal with 2:49 left Thursday night, and the Bengals defense kept Indianapolis out of the end zone to hold on for a 9-6 win in the preseason finale.

“I thought the poise element (was good),” Bengals coach Marvin Lewis said when asked about the former Alabama quarterback. “The protection isn’t always what we want and yet he’s always standing poise through it. I like his demeanor on the field and I’m very pleased with that. We’re very comfortable with where he is right now.”

But probably not comfortable enough to give McCarron the starting job ahead of Andy Dalton, who has taken the Bengals to the playoffs four straight times.

McCarron finished 15 of 28 with 219 yards and was sacked four times.

The game also was marred by three fan injuries at halftime. Lucas Oil Stadium officials issued a statement after the game saying that two men and a woman were hit by a bolt that fell from the roof into the lower seating bowl. One man and one woman were taken to a nearby hospital for further evaluation. Another man was treated at the stadium and released.

None of the injuries were deemed to be life-threatening, Barney Levengood, executive director of the Capital Improvement Board of Managers, said in the statement.

On the field, it was a predictably dull battle of the backups with field goals, punts and turnovers ruling the day.

All the Bengals could muster in the first half were two field goals from Mike Nugent to take a 6-0 lead.

Indy drove inside the Bengals 10-yard line three times in the second half, but got two short field goals from Adam Vinatieri.

And late in the game, rookie quarterback Bryan Bennett, Indy’s third stringer, lost a fumble at his 34-yard line, setting up Obarski for the winner.

Here are some other observations from Thursday’s game:

Dalton wasn’t the only one sitting out. Andrew Luck missed the game, too. So did Pro Bowl receivers A.J. Green, T.Y. Hilton and Andre Johnson as well as running backs Frank Gore, Jeremy Hill and Giovani Bernard. Colts outside linebacker Robert Mathis, the 2013 NFL sacks champ, also was out, too, even though he was activated from the physically unable to perform list Aug. 25.

The Colts and Bengals are trying to sort out their depth charts at running back, so they gave Vick Ballard and Cedric Peerman heavy workloads. Ballard, who missed most of Indy’s past two seasons and most of this preseason with injuries, and Peerman each had nine touches in the first quarter. Ballard finished with nine carries for 29 yards and three receptions for 12 yards before hurting his right hamstring injury in the second quarter. Cincinnati’s Peerman had seven carries for 12 yards and three catches for 38 yards.

Matt Hasselbeck is 39 years old and has a one-year contract with Indy and may have made his final start Thursday. The three-time Pro Bowler and former Super Bowl starter who is Luck’s backup finished 3 of 4 for 14 yards.

Linebacker Junior Sylvestre made one last impression on Colts coaches Thursday with three unassisted tackles and a sack in the first half. He also forced a fumble on the second play of the second half before leaving with an injured left ankle. The undrafted rookie has played well in the preseason. Bengals receiver Greg Little, a second-round draft pick in 2011, and Brandon Tate also made cases to be No. 4 on the depth chart. Tate had four receptions for 77 yards. Little had three catches for 43 yards.