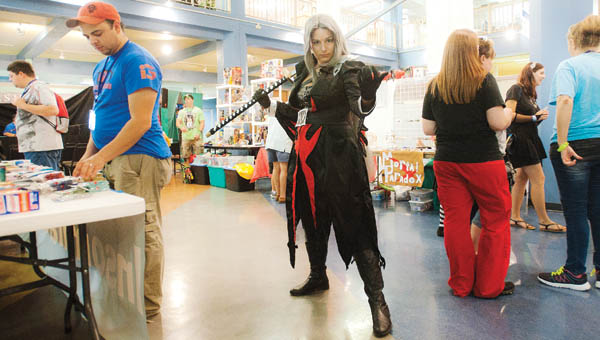 Mallory Grizzell is Lady Sephiroth from the Kingdom of Hearts making her way through the booths at the Highlanders Hero Con Saturday at the Highlands Museum and Discovery Center.

ASHLAND, Ky. — Lauren Littlepage happily posed with the children in her white and gold She-Ra costume as she was one of the vendors at the inaugural Hero Con at the Highlands Museum in Ashland.

“I’ve always loved costumes and always fascinated by these characters,” Littlepage of Huntington, said. “This provides magic for the children.”

The event was the brainchild of Highlands’ board member Darryl Akers.

“This brings all families together,” Akers said. “That’s why I was so excited to do this. Now we’re looking toward next year.”

Throughout the museum were tables set up with games, cards, comics and toys.

Jarred Greer brought part of his inventory from his shop, Inner Geek at the Town Center Mall, to the Hero Con.

“I’ve always been a toy collector,” Greer said. “Then my son rattled that chain and we started collecting more. My basement was full of stuff so starting a store seemed the logical progression.”

The comic book and games industry is in an upswing, he said.

“As a whole, comic books are very chic,” Greer said.

Randy Bazell came to the museum with his brother, Bryce Martin, who owns Goblin Traders in downtown Ironton.

Interest in cards with collectors is increasing, Bazell said.

“It’s fun and they can become incredibly valuable,” he said. “I think this is fantastic. I wish we could have something like this in Ironton.”