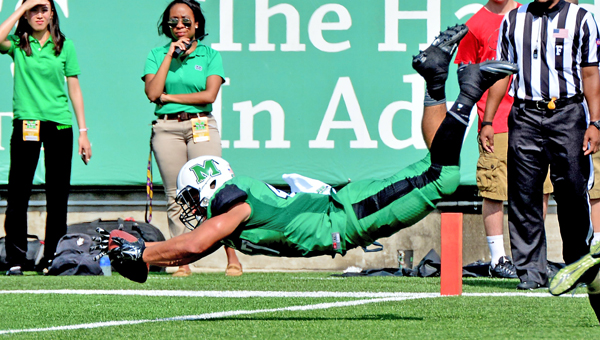 Marshall Thundering Herd running back Devon Johnson dives into the end zone for a touchdown during a 41-31 win over Purdue on Sunday in the season opener. It was Marshall’s first-ever win over a Big Ten team. (Kent Sanborn of Southern Ohio Sports Photos)

Lang returned an interception 30 yards for a touchdown on the first play from scrimmage, and his 55-yard return of a pick for a score with 1:20 left in the game preserved Marshall’s 41-31 win over Purdue on Sunday.

Both of Lang’s interceptions were thrown by Austin Appleby, who had four in the game.

“He threw it right to me and I made a play on the ball,” Lang said.

It marked the first time in school history that a Marshall player returned two interceptions for scores.

Lang became the second player from Conference USA to do it. The other was Cincinnati’s Shawn Ferguson in 1998.

In between, Lang was busy, too, making a team-high 17 tackles as Marshall avoided another home loss to a team from a major conference. The 2014 Conference USA champion had five straight such losses since 2005.

After Devon Johnson put Marshall ahead 34-31 with a 6-yard scoring run with 2:50 remaining, Purdue had plenty of time left. But Lang intercepted Appleby in the middle of the field and returned it down the left sideline.

“I had to make a play for our team,” said Lang, a junior who had one interception in each of his first two seasons.

Marshall quarterback Michael Birdsong had an up-and-down debut in his first game since transferring from James Madison a year ago. Replacing four-year starter Rakeem Cato, Birdsong went 23 of 36 for 234 yards with two touchdowns. He looked shaky at times before a sellout home crowd and Marshall’s offense misfired when it had opportunities to scores.

Birdsong threw behind Nick Mathews inside Purdue’s 10 late in the third quarter and Marshall settled for a field goal.

Two series later, Johnson got into the secondary but lost the ball at end of the 33-yard run and Purdue took over at its 25.

The Boilermakers drove to the Marshall 5. Appleby overthrew an open Jordan Jurasevich on third down in the end zone, and a short field goal extended Purdue’s lead to 31-27 early in the fourth.

Johnson had a 20-yard scoring run for Marshall in the first quarter but was quiet for most of the game, something he wasn’t accustomed to last year when he ran for 1,767 yards. He was limited Sunday to 89 yards on 11 carries.

“We didn’t finish,” said Purdue coach Darrell Hazell. “When you’re up (with) seven minutes to go, you’ve got to finish. But we’ll learn.”

Appleby, the fifth quarterback to start a season for Purdue in the past five years, went 31 of 48 for 270 yards and one score.

Appleby was at his best in the first half when he stiff-armed a Marshall defender with his left hand while throwing a short pass to Danny Anthrop, who took it 9 yards for a score.

Knox, who played on special teams a year ago, ran for 102 yards on 22 carries, including a 4-yard TD run in the first quarter.

Jones made his mark in the third quarter when he burst into the secondary, pushed his own lineman aside and dashed 36 yards for a touchdown to put Purdue ahead 28-24. Jones had 72 yards on 12 carries.