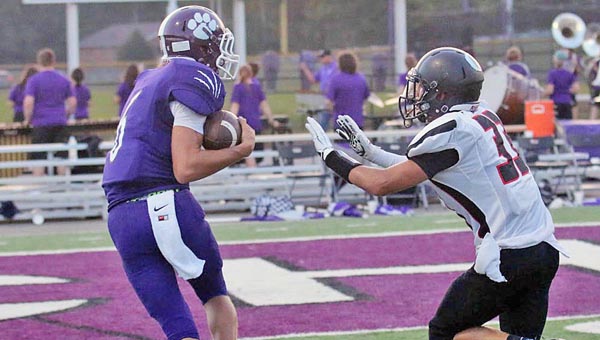 That seems to be the way it is when the Chesapeake Panthers and Symmes Valley Vikings hook up in their annual football game and this Friday won’t be any different.

“Execution and turnovers is what it comes down to between us and them.”

Chesapeake enters the game 2-0 and the Vikings are 1-1. Chesapeake scored late last season as they rallied to win 21-18.

“They’re experienced on both sides of the ball and they’re solid. They’re bigger up front than last year,” said Clark.

“Their quarterback (Casey McComas) and their backs scare me to death. If (McComas) doesn’t find a receiver, he can get outside the pocket. They have good team speed,” said Webb.

“They have a very athletic line that executes what they want them to do. Their fullback (Maccoy Brown) can gash you. He’ll take you 20 or 30 yards for before you bring him down.”

Besides Brown and McComas, the Panthers feature J.W. Bartrum and Ty Wilcoxon in the backfield.

Clark said the Vikings have always been a run-oriented team like the Panthers, but he said quarterback Derrek Smith adds a new dimension to their offense.

“They still want to run, but they mix it up. They can throw it some,” said Webb. “The quarterback makes plays. He looks to run the ball more than last year. (Collin) Webb can run and (Brandon Craft) and (Levi) Cade aren’t bad.”

“Defensively they’re disciplined and they fly to the ball. We have to execute and match their intensity. Their linebackers are awful good,” said coach Webb.

Clark called Dement “their best player overall. (Defensive tackle Dakota) Watson looks good on film. He can cause some problems with his size and the other tackle (Jarod) Sheppard has some size.”

Tolsia (2-0) at Fairland (0-2): It’s a battle of opposites. The young Dragons are rebuilding while Tolsia has a a group of upperclassmen who have taken their lumps the past three years and are reaping the benefits including an upset win over Wayne. QB Seth McMillion, WR Blake Rose, RBs Luke Presley and Jennings Holland and TE Tyler Stroud are the key weapons for the Rebels.

Reds lose to Pirates; Votto gets upset over ejection