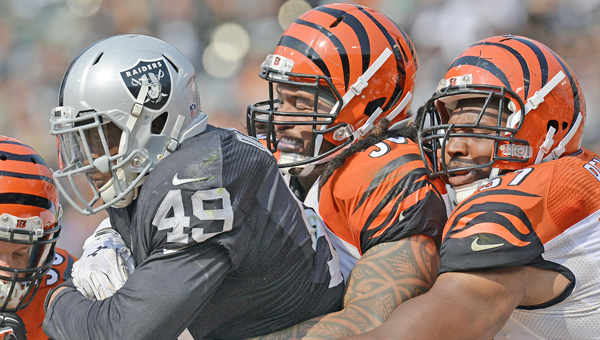 The Oakland Raiders’ Jamize Olawale (49) is tackled by the Cincinnati Bengals’ Rey Maualuga (58) and Vincent Rey (57) in the third quarter at O.co Coliseum in Oakland, Calif., on Sunday The Bengals won 33-13. (MCT Direct Photos)

For Jack Del Rio and the Raiders, it’s hard to imagine it getting much worse.

Dalton welcomed Tyler Eifert back to the lineup by throwing him two touchdown passes and Jeremy Hill ran for two scores to help the Bengals spoil Del Rio’s coaching debut in Oakland with a 33-13 victory over the Raiders on Sunday.

“We got the looks that we wanted,” Dalton said. “Our guys made plays. I think that’s what it came down to. We executed exactly how we wanted to and it allowed us to have big games.”

Dalton was helped by the return of Eifert, who went down with a season-ending elbow injury in the season opener last season.

With A.J. Green taking the attention on the outside, Eifert had free reign in the middle of the field to catch nine passes for 104 yards as the Bengals (0-1) broke out to a 33-0 lead and coasted.

It was a nightmare game for the Raiders (0-1), who lost starting quarterback Derek Carr to a hand injury in the second quarter and were held scoreless until midway through the fourth quarter in Del Rio’s first game as coach.

“That’s a very disappointing, embarrassing effort,” Del Rio said. “I take full responsibility. We’ll get it turned around and corrected.”

The tone was set right from the start as the Raiders went three-and-out on their first possession — the eighth straight season they began with a three-and-out or turnover.

Dalton then moved the ball easily on an 11-play drive capped by Hill’s 3-yard score on fourth-and-1 when he got outside of Ray-Ray Armstrong and raced past Ben Heeney into the end zone.

Dalton frequently found the middle of the field open against a Raiders defense that lost starting safety Nate Allen to a knee injury in the first half.

Dalton hit Eifert on scoring strikes in the closing seconds of the first half and then late in the third quarter to make it 30-0, driving Oakland fans to boo or head to the exits.

“We definitely showed what we’re capable of doing with all the weapons we have as an offense,” Hill said. “I think the sky is the limit for us.”

After 12 straight years without a winning record or playoff berth, the Raiders were hoping for more success with Del Rio in charge and Carr back for his second season as quarterback.

But Carr once again struggled to get the ball downfield, going 7 for 12 for 61 yards before hurting his right hand trying to stiff arm Adam Jones on a scramble late in the second quarter. X-rays were negative, but Del Rio did not say whether Carr would miss time.

Matt McGloin fared no better as the Raiders didn’t even take a snap in Bengals territory until the first play of the fourth quarter against a Bengals defense that looked improved from last season. They avoided the shutout when McGloin threw a pair of TD passes to Marcel Reece in the fourth quarter.

The game was chippy with several personal fouls, including one on Jones for ripping off the helmet of Oakland receiver Amari Cooper and slamming his head against it. Austin Howard, who was already called for holding on the play, then shoved Jones as a mild skirmish broke out. The penalties wiped out a 60-yard run by Jamize Olawale.

“I’m here to play football,” Jones said. “I don’t back down from nobody and I’m not out there trying to start anything. I’m just having fun playing football.”

NOTES: Aldon Smith, signed by Oakland on Friday, did play but made little impact as a pass rusher. He had one solo tackle, one assist and one quarterback pressure. … The Bengals got their first win in Oakland after 10 previous losses. … Raiders S Charles Woodson left with an injured shoulder on the final drive.

Browns struggle in loss to Jets