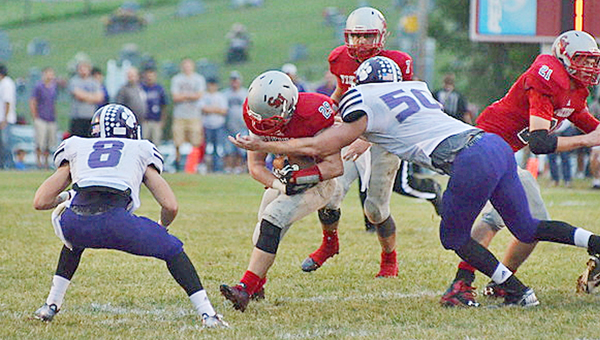 Symmes Valley Vikings’ running back Collin Webb (22) tries to run through the tackle of Chesapeake Panthers’ linebacker Brad Meadows (50) during last Friday’s game. The Vikings travel to Oak Hill this Friday in their SOC opener. (Robert S. Stevens & The Gold Studio of Ironton)

The Vikings weren’t overlooking their previous games, but this week’s visit to Oak Hill to play the Oaks signifies the start of the Southern Ohio Conference schedule.

“This starts SOC play and Oak Hill is one of the three defending SOC champions,” said Vikings’ coach Rusty Webb. “If you want to win the league, you have to take care of business and that’s what it’s going to be for us and for them.”

Symmes Valley won last year’s meeting 31-28 in overtime to force a three-way time for the league title between the Vikings, Oaks and Northwest.

Webb said it will be more difficult to win the SOC this season not only because the Vikings play at Oak Hill but because of the addition of Beaver Eastern to the league.

“The winner definitely has a leg up on the rest of the league. Overall our league is up this year. With the addition of Eastern, that makes our league stronger,” said Webb.

Symmes Valley comes into the game 1-2 while the Oaks are 0-3 including a 17-14 loss to Rock Hill last week.

The Oaks have had to replace some key personnel this season. Last year, Clayton Christensen threw for 1,610 yards and 20 touchdowns last year and his leading receiver was Johnathon Harrison who had 49 catches for 1,078 yards.

Both are gone and that leaves Lane Burdine as the quarterback and Cody Swann as his main target.

“Burdine can move around and he makes plays. They’re still big and strong up front and solid on defense,” said Webb.

The running game is led by Matt Gilliland. Also in the mix are Chris Coy and Willy Harris.

Gilliland leads the defense from his middle linebacker spot. He is flanked by Tyler Trisch and Matt Carpenter.

“They are mixing up their offense and giving you different looks and that makes it harder to prepare on defense,” said Webb.

The Ohio Valley Conference also kicks off its schedule and it includes the Portsmouth Trojans playing their first league football game ever as they visit the Fairland Dragons.

Portsmouth is 1-2 and Fairland is 0-3. Both teams feature young quarterbacks: sophomore Cole Lowery at Portsmouth and freshman Joel Lambiotte at Fairland.

Coal Grove (0-3) has been able to move the ball but the Hornets have been plagued by mistakes.

South Point is another young team looking for its first league win in two seasons.

Rock Hill is 2-1 and faces unbeaten Chesapeake (3-0). The Panthers have the most returning starters of any team in the conference.

In a non-league game, the Ironton Fighting Tigers travel to Ashland, Ky., for their annual rivalry game.

Buckeyes glad to be back on schedule

COLUMBUS (AP) — Last week was anything but routine for No. 1 Ohio State. A Monday night road game at... read more