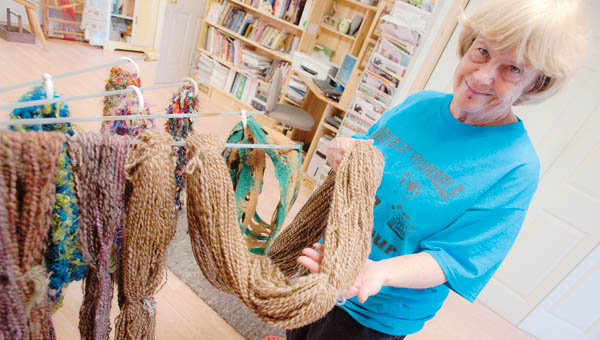 CHESAPEAKE — For Tom Ross it was love at first sight. The Chesapeake horseman and breeder of show dogs was at an event in Columbus about 20 years ago when he saw a sign proclaiming “Come See the Llamas.”

That was it. Six months later Tom Ross had his first llama and he and his wife, Judy, and their daughter, Mitzi, have never looked back.

Their farm, Good News Llamas, was one of four farms on the inaugural farm tour sponsored by the soil and water conservation district and the Ohio State University extension office.

The goal was to showcase farming in Lawrence County to those living in more urban areas. Other venues were the Pratt Dairy Farm and Greenhouse; Getaway Farms and the Equine Medical Center.

Now there are 22 llamas and two alpacas at Good News where they are all kept as pets. Once a year the animals are sheared to harvest their hair, which is then spun into yarn.

Mitzi and Judy create scarves, rugs and a variety of other fiber art and teach classes in knitting, felting and spinning.

As Joe showed off a couple of his llamas, letting children pet them and ruffle their fur, he said, “They are such docile animals. They get a bad rap.”

Dealing with his disabilities

Born in South Bend, Indiana, with no arms or legs, motivational speaker and comedian Brett Eastburn will speak in the... read more