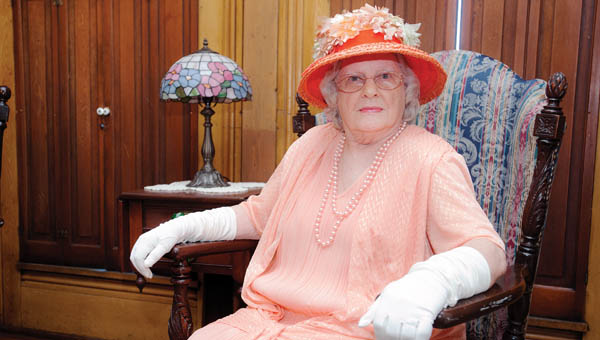 Nannie Kelley Wright will be portrayed by Ironton resident Kay Radar at this year’s Lawrence County Historical Society’s Woodland Cemetery Walk event this Saturday. The walk will start at 5 p.m.

A chance meeting in Hanging Rock put Edward Jordan with his future wife, Augusta. From there they went onto a life of public service with Jordan becoming Solicitor of the Treasury serving until the end of Andrew Johnson’s administration.

Their story will be among the new characters that will bring history to life as part of the Lawrence County Historical Society’s Woodland Cemetery Walk.

“They took their produce to Hanging Rock,” Peggy Hartwig who will portray Augusta Jordan on Saturday’s walk starting at 5 p.m. “That’s where they met.”

Joining her will be Matthew Walters who will take on the character of Jordan, a lawyer who founded Portsmouth’s Democratic Enquirer newspaper, was Portsmouth City Clerk and Lawrence County Prosecuting Attorney. Jordan died in 1899 in Elizabeth, New Jersey, and is buried in Woodland.

Hartwig was encouraged to be part of the historical walk by Kay Rader, who will reprise her role as Nannie Kelley Wright, the only woman ironmaster.

“She told me the character and since then I have really gotten into it,” Hartwig said.

Another addition will be Breanna Smith portraying world-famous poet and author Mary White Slater, who campaigned for women’s suffrage, fought the entry of the United States into the League of Nations; and forced the re-opening of the Briggs Library.

The Jordans’ daughter, Emily, married Henry Clay Folger, CEO of Standard Oil of New York, and the couple collected rare Shakespearean titles with the goal of opening a Shakespearean library. That happened in 1932 when that library opened on Capital Hill.

“I end my description with sometimes we ourselves do not do miraculous things but then our children do,” Hartwig said.

The historical walk is self-guided with a shuttle from Liebert available to go over to the cemetery.

Idea of saving Ironton-Russell Bridge not drawing much city support

An Ironton resident’s desire to save the 93-year-old Ironton-Russell Bridge may have drawn petition supporters, but most city officials see... read more