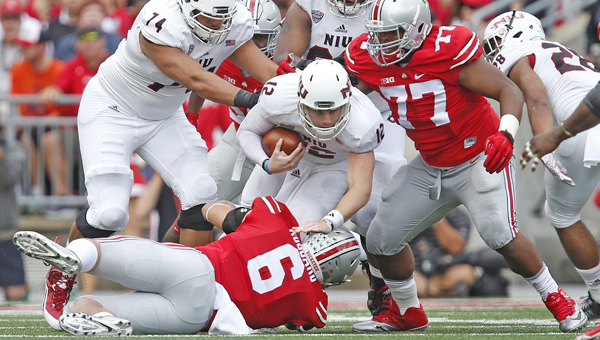 But to look the redshirt freshman today it’s hard to envision the 6-foot-5, 265-pound Hubbard once being a slightly built prep lacrosse standout with a commitment to play for Notre Dame.

“I miss lacrosse,” Hubbard said. “I could do some damage out there. I haven’t picked up a stick since I was 40 pounds, 50 pounds lighter.”

He added the weight to handle hefty offensive linemen in his newfound spot as the backup to and sometimes partner with All-America defensive end Joey Bosa for the top-ranked Buckeyes, who look to go 3-0 against Western Michigan on Saturday.

Hubbard made his college debut starting for the suspended Bosa in the season opener at Virginia Tech on Sept. 7 and had four tackles, including a sack. In the next two games against Hawaii and Northern Illinois he had a combined 3 1/2 sacks and a fumble recovery.

“You see him making huge improvements, really, every day he goes out there,” co-defensive coordinator Chris Ash said. “From week one against Virginia Tech to where he was this last Saturday, a completely different player.

“It’s hard to explain his development because it’s been off the charts, to be honest with you.”

Hubbard was an all-state safety at Cincinnati Archbishop Moeller High School but, when he came to Ohio State last year, he was first tried at linebacker, then moved to tight end. By the fourth week of the season he was a linebacker again for about a month.

All the while head coach Urban Meyer debated burning the redshirt to take advantage of Hubbard’s athleticism. Ultimately, Hubbard remained strictly on the scout teams, but was sent to defensive line coach Larry Johnson for tutelage.

“I sat down in the back of the room,” Hubbard said. “I had no idea what he was talking about the first four or five weeks. I observed and picked up the lingo how things work in that room.”

The defensive end scenario played out just as Moeller football coach John Rodenberg predicted when Hubbard was a senior.

“I obviously didn’t believe him,” Hubbard said. “He’s the only one that said that to me.”

Hubbard, of course, had to bulk up to get there. He was 6-4, 187 as a freshmen but when it became apparent that football was his calling, he gave up lacrosse his senior season and hit the weights so he could enter Ohio State at about 230 pounds.

“I love lacrosse and the community,” he said. “It was hard to leave the guys I was playing with. That was the toughest part.”

Hubbard hasn’t completely forgotten the sport. He still maintains the agility and hand-eye coordination from lacrosse to help him battle in the trenches.

“During the offseason he was working hard, showing the other guys he can go out there and do it on the field,” linebacker Raekwon McMillan said. “He just had to show he could handle the game pressure of 100,000 (fans).”

Hubbard got his indoctrination in the prime-time season opener.

“I didn’t feel like I was a defensive end until I got in the game and actually played against Virginia Tech,” he said. “I always wondered what an actual game would feel like at defensive end because I had only seen practice reps. After I saw the game reps I realized that’s where I belonged, at defensive end.”

CINCINNATI (AP) — In a season full of indignities, the Reds are on the verge of another one. The New... read more