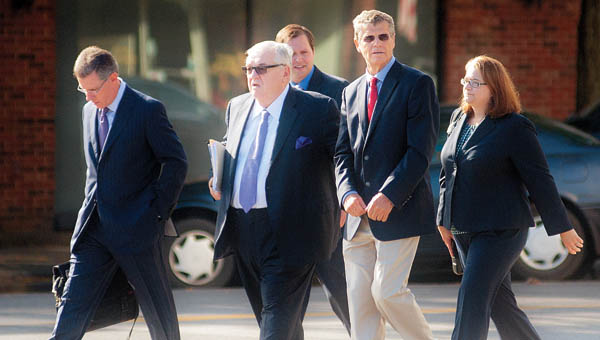 A leading cardiologist in the area has pleaded not guilty to 27 federal counts in U.S. District Court, Eastern District of Kentucky resulting from his work at an Ashland hospital.

Dr. Richard Paulus, 68, made the plea on Thursday morning to one count of health care fraud and 26 counts of willfully and knowingly making false statements.

“From on or about an exact date unknown but at least July 24, 2008, through on or about July 31, 2013, Paulus did devise and intend to devise a scheme and artifice to defraud and obtain money from federal health care benefit programs by means of false and fraudulent pretenses, representations and promises,” the indictment states.

Paulus was indicted on Sept. 3 by a Lexington grand jury following his seven-year career with King’s Daughters Medical Center.

“From 2006 to 2012 Medicare paid KDMC in excess of $30,000,000 for in-patient cardiac stent placement performed by Paulus,” the indictment states. “The (Kentucky Board of Medical Licensure) received an anonymous grievance alleging fraud, abuse and negligence by Paulus. “The KBML reviewed the patient medical file referenced in the anonymous complaint, as well as 14 additional patient medical files of Paulus.

“Based upon this review the KBML concluded that Paulus had engaged in conduct ‘which departed from or failed to conform to the standards of acceptable and prevailing medical practice within the Commonwealth of Kentucky’ in regard to all 15 charts reviewed.”

The medical board said what it called “ the prevailing scenario” was patients with chest pain and few risk factors for heart disease would immediately undergo a coronary angiography.

“A number of these cases had trivial-to-mild coronary artery disease, but by report would be said to have severe disease,” the indictment states.

In 2014 Paulus entered into an agreed order of retirement with the medical board and kept his medical license. He agreed to retired indefinitely.

On the other 26 counts the sentence would be not more than 5 years imprisonment; $250,000 fine; and three years supervised release.

Officeholders who made a $65,000 contribution to the fair board defended their decision at Thursday’s Lawrence County Commission meeting. At... read more