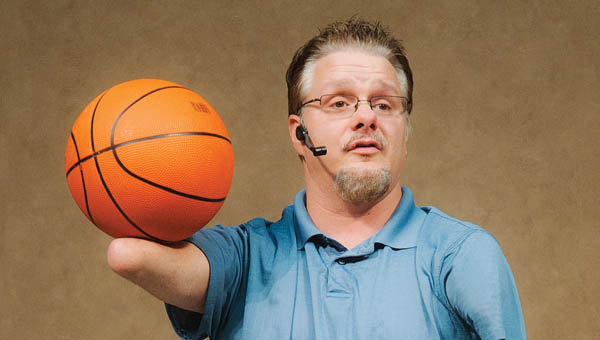 Dribbling a basketball and tossing it into the audience that gathered at Ohio University Southern on Thursday night to hear him speak, Brett Eastburn demonstrated that just because someone doesn’t have arms or legs doesn’t mean that they can’t do things that other people can.

Eastburn, who was born without limbs, is a motivational speaker, author of the book “I’m Not Missing Anything” and comedian who travels around world speaking to audiences about his life.

“I always knew I had a message to convey to society,” said Eastburn. “You can do anything you set your mind to.”

During the talk at OUS, Eastburn asked the audience for a definition of what it means to be handicapped.

“Everywhere I go I ask for the definition of handicapped,” said Eastburn. “You’re handicapped only if you choose to be.”

Breaking wooden boards in his Tae Kwon Do demonstration during the talk, Eastburn illustrated that he has chosen not to be handicapped.

Eastburn said that after realizing that the word “handicap” does not define who a person is, he began to try to do more things.

He ended up playing football and basketball for his school and participated in a variety of other sports.

“When you say you can’t do (something) you’re right because you’re not even going to try,” said Eastburn. “Most of us go: ‘It can’t be done—That’s simply not true.”’

While he said that the majority of his life he has had a positive outlook on life Eastburn said that he struggled in middle school to deal with the challenges of life without limbs.

“I hit the bottom and I’ve been going up ever since,” said Eastburn.

Although there is no medical reason why Eastburn was born without limbs he said that he believes God gave his condition to him so that he could encourage other people to not limit themselves by perceived handicaps.