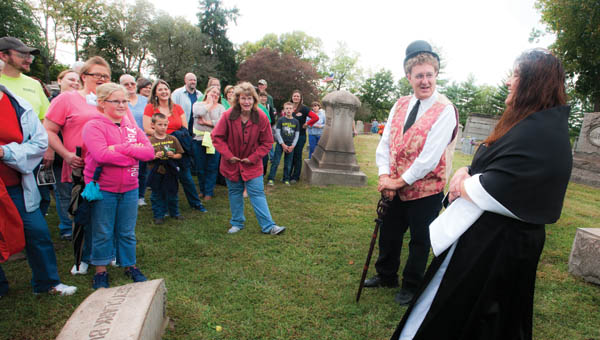 Climbing down from the top crypt inside The Abbey at Woodland Cemetery, Dr. Chester Casey, a little pale from lack of sun, nevertheless greeted guests to the mausoleum with a warmth he hasn’t personally felt for a while.

But every year on the last Saturday in September, he pops out to tell the story of The Abbey and his family during the Lawrence County Historical Society’s Woodland Walk.

Born in 1891, Casey, aka Tom Epperly, started practicing medicine in Ironton in 1924.

“I probably delivered your father or grandfather,” he told visitors, “and I’m sure he was a brat.”

“We keep this in the family,” he said.

Crypts when the mausoleum opened cost between $350 and $400 in the limestone, granite and pink marble structure.

Crowds roamed Woodland in early evening listening to the history of Ironton through the words of the re-enactors.

Gertrude Means Julian, daughter of the famous Means ironmaster family, married William Alexander Julian, an entrepreneur and last man to hold the post of treasurer of the United States under Franklin Delano Roosevelt.

Martha Ellen Johnson fell in love with a preacher, the Rev. Henry D. L. Webster, and wanted to marry, but her future husband was chased away by her sister, fearful the man could not provide the lifestyle the young woman was used to.

Heartbroken the man wrote “Lorena,” a love song, to the young woman that was sung by soldiers on both sides of the Civil War.

Hiram Campbell brought the first persimmon tree to the city, had created stained glass windows valued today at $1.2 million and had President Rutherford B. Hayes to dinner.

And then there is Nannie Kelley Wright, the grande dame of Ironton and the historical walk, portrayed by Kay Rader. Nannie, who was once the second richest woman in the world and the only woman ironmaster, crossed the Atlantic 14 times, was presented at the Court of St. James and married a man 15 years her junior.

“When I died Min Grimes (of The Tribune) wrote of me, “her life was one of bold adventure,” Rader said. “And it was.”

CLEVELAND (AP) — An independent assessment about how the Ohio Lottery can operate more efficiently will include a study of... read more