Redmen, Panthers 5th in ratings; other teams remain in contention 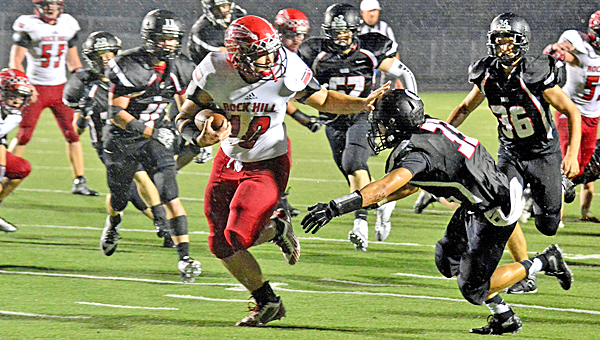 Rock Hill running back Danny Long (10) races through a big hole in the defense. Rock Hill and Chesapeake were among the early leaders of the postseason playoff computer ratings. (Robert S. Stevens & The Gold Studio of Ironton)

It’s early and there are still a lot of possibilities.

Several area teams are in the postseason playoff hunt and several others can put themselves in position to make the playoffs simply by winning.

In Region 17 of Division V, the Rock Hill Redmen (3-2) are currently fifth with a 6.25 average. The Redmen need to win out to maintain their playoff chances.

Ironton is just 1-4 with a 1.8 average, but the Fighting Tigers could vault into the top eight spots by winning their final five games.

There’s a similar situation in Region 21 of Division VI with the Chesapeake Panthers (4-1) and Coal Grove Hornets (3-2) who must still face each other.

Chesapeake is fifth in the region with a 6.75 average while Coal Grove is at No. 13 with a 3.9 average. Each team needs to win out to enhance its chances of making the postseason.

But the Vikings have some big point games the rest of the season with Beaver Eastern, Portsmouth Notre Dame, South Point, Sciotoville East and Northwest.

The top eight teams in each region of each division qualify for the postseason.