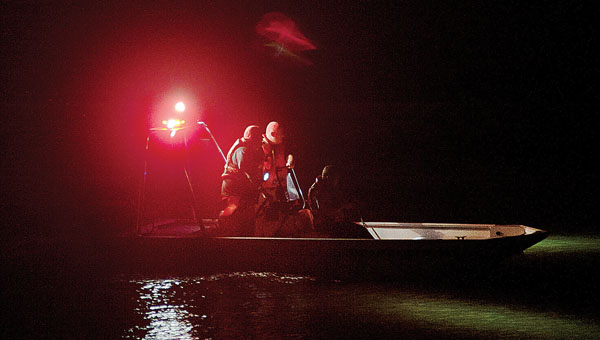 Crews from Ironton and Russell Fire Departments are seen on location at the Center Street Boat Landing as they search for a submerged vehicle.

Rescue workers are at the Center Street Boat Landing in Ironton after witnesses saw a car go into the Ohio River, according to police.

“As of right now, we have interviewed a couple of witnesses who observed the vehicle go into the river,” Ross said. “We are still trying to confirm someone was in the vehicle when it went into the water.”

Ross said the witnesses said they saw one person in the vehicle and the vehicle is reportedly completely submerged in the water.

Ironton, Ashland and Russell, Kentucky, fire departments, as well as the Ohio Department of Natural Resources are assisting in the recovery of the vehicle.

Ross said the ODNR would use its sonar to locate the car.

The Center Street landing is closed at this time and the IPD is asking that people stay away from the area during the rescue efforts.