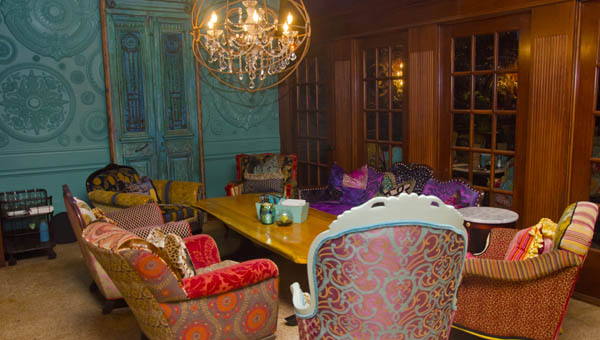 While Le Bistro specializes in French comfort food, The Cellar Door is focused on tapas, or small plates that are designed to be split.

Be it Tuscany, San Francisco or even New York, when guests enter The Cellar Door, located below Huntington’s Le Bistro, they envision themselves whisked away from the typical downtown scene.

“Here, you can be anywhere your heart takes you,” owner Pam Abraham said.

For Abraham, it’s a secret garden — a place to retreat. “I wanted to create an escape from the norm,” she explained.

The Cellar Door opened Jan. 1 after several months of renovations. “It was sort of like a pregnancy,” Abraham described. “It took nine months to develop, and then there was a birth.”

It’s another in the long line of projects for Abraham, a long-time art enthusiast whose family also owns Le Bistro.

“My entire life, one of the things I’ve enjoyed so much is creativity,” Abraham said. “But, I’ve been saying that this is my last hoorah,” Abraham said. 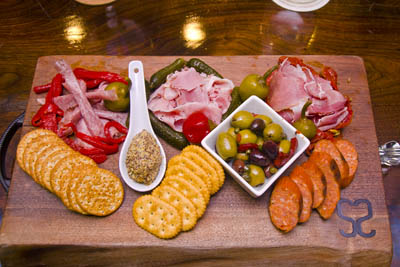 While Le Bistro specializes in French comfort food, The Cellar Door is focused on tapas, or small plates that are designed to be split. “You’re not just sharing the food, you’re sharing the experience,” Abraham said.

The menu, which Abraham said is in the process of being revised, is composed of 35 different types of tapas that rotate on a regular basis. Some of the most popular include Picasso’s Nachos (made of crisp wontons, glazed beef tidbits, roasted corn salsa, poblanos and cheese sauce), Voodoo Red Curry (a chicken dish with rice and peanuts), Flying Pigs (sesame-glazed pork wings), Spaniard’s Shrimp Cocktail (with pear and horseradish sauce), Cellar’s Caesar Salad (topped with rosemary croutons, parmesan and smoked tomato) and Goya’s Dark Secret (a stacked fudge cake).

“We’re very serious about studying tapas,” Abraham explained. “We keep our eyes and ears open, and we’re always trying to create new things that are classical with a bit of a contemporary twist.”

There’s also a diverse selection of craft beer, wine and cocktails. “We try to have some unusual ones — ones that you aren’t likely to see somewhere else,” Abraham said.

Like the food, Abraham said that she wanted The Cellar Door’s design to be original and artsy, something that would match well with the restaurant’s proximity to Marshall University’s new Visual Arts Center.

“In my mind I was going to complement the whole thing,” she explained.

At the center of the project were ancient doors that Abraham had discovered in Old Central City, Huntington’s antique district. “I wanted to build the whole space around them,” Abraham said.

But it wasn’t just the doors themselves that sparked Abraham’s interest; it was what may have once been behind them.

“The interesting thing is that they usually led to secret garden,” she said. “I wondered where they used to stand, who once walked through them and what kinds of secret gardens that they might have led to, and I began to plan how I would entwine the two.”

Abraham enlisted the help of local building and design professionals and artists to carry out her unique vision that included a state-of-the art event room and conversation areas completed with hand-painted murals, ornate light fixtures and custom, colorful furniture and accents.

“It all went back to one word­ — imagination,” Abraham said. “I’m not traditional. ”

Using fabrics of all designs and origins, Abraham worked with Darren Diamond, owner of Diamond Furniture Gems and Restorations, to create distinctive seats.

“All of these chairs are extremely different,” Abraham said. “They have their own personality, their own past.”

Abraham’s interest in interiors has even led to the creation of another venture, Chairy Couture, a specialty furniture company where people can purchase similarly styled pieces, with Diamond. “We’ve done several living rooms,” she said.

Abraham said that it’s common for tablemates at The Cellar Door to start off the evening as complete strangers and connect over the course of the evening, and that’s just what she hopes to hear.

“It’s more than the food or drinks,” Abraham said. “It’s about the camaraderie, the conversations.”

The two, who are originally from Fayette County, West Virginia, recently moved from their 1,500-square-foot home in Tampa, Florida, into... read more