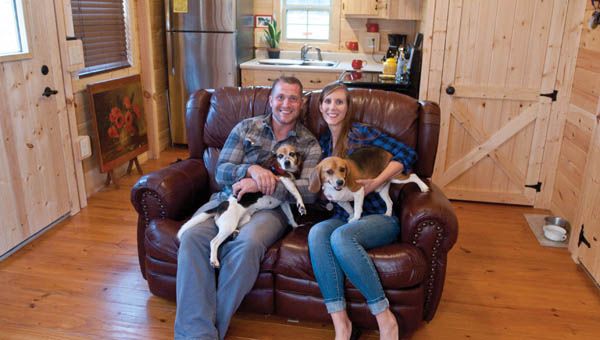 The two, who are originally from Fayette County, West Virginia, recently moved from their 1,500-square-foot home in Tampa, Florida, into a home a fifth of that size on a farm in Vanceburg, Kentucky.

VANCEBURG, Ky. — For Jessica and Luke Morehead, getting more out of life started with having less — stuff, that is.

The two, who are originally from Fayette County, West Virginia, recently moved from their 1,500-square-foot home in Tampa, Florida, into a home a fifth of that size on a farm in Vanceburg, Kentucky.

That meant, among other things, getting rid of a lot of their possessions.

“We just wanted to go simple,” Jessica said. “And, like, half the stuff we had we didn’t need or use.”

“Also if you go simpler and smaller, we can focus on other things besides materialistic things,” Luke added.

The two said getting rid of their things was not difficult. They found it to be a stress reliever. Jessica, a speech therapist, found a family through the school she worked for who needed the things they wanted to unload.

It felt good to help people, she said, so they continued, giving a lot of stuff to Goodwill, too.

“It was almost relieving,” Jessica, 27, said. “And then once you start giving stuff away, you just want to give more away.”

They didn’t get rid of everything. They kept a few outfits, their pictures, musical instruments, some books and their Bibles.

“We made a list of what’s important to us,” Luke said. “And where we want to be in a year, what we want to have, and we got rid of things that sat around we didn’t need.”

The two say they don’t miss the extra space, or Florida. They had moved there for Luke’s job with the Air Force.

“Tampa just really wasn’t for us,” she said. “I mean the beaches are nice but I just felt like they were so overcrowded most of the time. It’s nice to visit but it’s not really nice to live there.”

The couple’s new home is on the land where Jessica’s grandfather once grew tobacco. He passed away last summer and left the land to Jessica.

Their new house is a 300-square-foot log cabin built by Amish Made Cabins, a Shepherdsville, Kentucky, company.

To one side of the kitchen is a multipurpose closet where they keep their stackable washer and dryer. They also hang clothes and put canned food there. A dining room table Jessica found on Etsy folds up into a piece of art that sits against the wall, creating more space.

The two sleep on a memory foam mattress in a loft, which is accessible by ladder, above the back part of the house. The loft, which is only 3 feet tall at its peak, has led to a few head bumps in the time they’ve been there, they said.

“We did think the loft was going be a little bit taller, so if you’re going have a loft, make sure you give yourself some head room,” Jessica said.

The house is hooked up to a septic tank and has running water and electric. There’s a wall-mounted air conditioner and a propene heat unit.

“We had six people in here at one time and we still had plenty of room,” Luke said of the home.

Their new home cost them around $40,000 in all. It was around $28,000 for the home itself, but they paid more for the foundation and the septic tank, they said.

A porch on the front of the home is where the couple spend a lot of their time.

“Half the time we’ll eat outside on the porch and we have our little table here that we’ll eat at,” Jessica said.

“It actually kind of forces us outside a lot too,” Luke said of the small space. “We’ll build fires outside and we’ll spend a lot of time as we can outside, which is relaxing to me.”

The couple enjoys being outside. They have two dogs and they keep kayaks and bikes in the barn by their home. They garden and recently started raising pigs. Eventually they’d also like to raise alpacas and put mountain biking trails on the land.

The Moreheads have been in the house since February. At first they felt like outsiders on the small country road where they moved. Putting in a tiny house didn’t help.

“It was funny because we had somebody drive by and they were like, ‘you all building a shed?’” Jessica recalled, laughing.

But people are friendly now.

“Anyone who drives by everyone waves,” she said. “You just kind of get that home-town feeling as far as that goes.”

The idea to ‘go small’ and buy a tiny house came as the couple read about minimalism. It appealed to them, they said.

“We (as a society) have to have more, more, more, more and eventually it wears you out,” Luke said. “You’ve worked your whole life to pay for something you’ve never owned and you’re just a sucker to the system.

They say they would recommend going small to anyone.

“I would suggest anybody doing it,” he said. “That way you’re more free to do whatever you want with your money and your time.”