Redmen roll past Trojans 38-14 in OVC 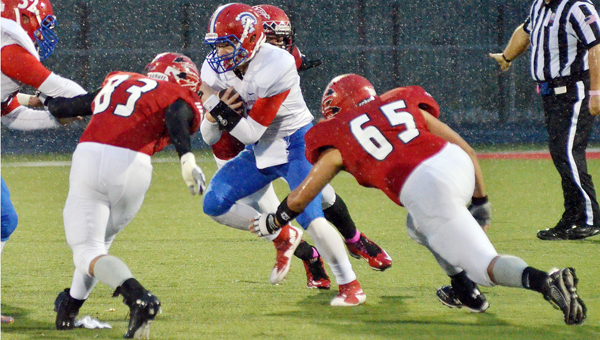 PEDRO — George Gershwin wrote the song “I Got Rhythm,” and a long list of singers have recorded it.

The Rock Hill Redmen did their own version on Friday as they ran past the Portsmouth Trojans 38-14 in an Ohio Valley Conference game.

“We got in a rhythm offensively and defensively,” said Rock Hill coach Todd Knipp.

“We still squandered some scoring opponents. We were able to establish the run. The weather didn’t permit too much of a passing game and we were happy to keep it on the ground.”

Brady Knipp added 58 yards on 13 carries, Zach Harrison had a 6-yard scoring run, Trystan Matney ran once for 12 yards and Matt Malone 8 yards on one attempt.

Rock Hill had 17 first downs and controlled the clock for 29:33 or the 48 minutes. The Redmen threw just one pass for one yard.

“Our kids up front did a real good job and our backs were running hard and they were able to break tackles,” said Knipp.

“They’re getting better every week. They’ve really jelled and they are doing a good job for us.”

On the defensive side, the Redmen got interceptions by Matney and Blankenship and also recovered three fumbles in the rainy weather.

“Their quarterback started to get some yards on us and we made some adjustments and shut them down,” said coach Knipp

After a scoreless first quarter, Rock Hill took an 18-6 halftime lead and made it 26-6 at the end of the third quarter.

The lead was 38-6 before Knipp emptied his bench.

Knipp was pleased with how his team bounced back after a tough 33-21 loss to Coal Grove last week.

“I preached all week that this was a game for us to bounce back. We have to execute our plan and good things would happen,” said Knipp.

Rock Hill is open this week and visits Ironton on Oct. 16.

Death welcomes visitors to the graveyard of the Dr. Dekay’s House of Screams at the Ro-Na. First weekend of haunted... read more