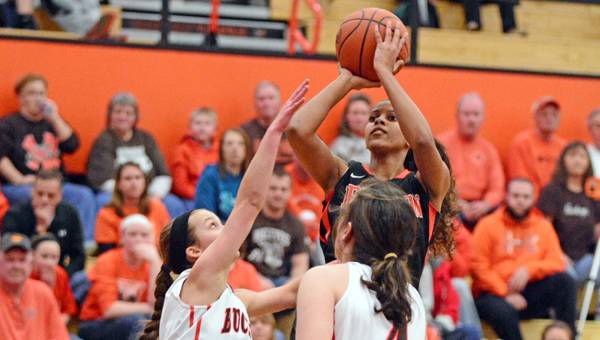 Barrier said Virginia Tech has changed its coaching staff with the exception of the head coach.

“I didn’t want to walk in blind. None of the coaches who recruited me weren’t there except the head coach,” said Barrier.

James Madison is coached by Kenny Brooks who is in his 14th season and has a 310-116 record, thus making him the winningest coach in JMU history.

The Lady Dukes were 29-4 last season, won their fourth Colonial Athletic Association championship and earned a berth in the NCAA tournament for the fifth time during his tenure.

Although her position could change, Barrier said she initially will play a two or shooting guard.

Barrier has more than 1,000 career points. The 5-foot-11 senior averaged a career-high 19.8 points a game last season as Ironton went 19-6 and reached the regional semifinals.

A first team Division III All-Ohio selection, she averaged 9.3 rebounds, 28 assists, 3.5 steals and 2.2 blocks a game. She shot 52 percent from the field and 38 percent from behind the 3-point line and shot a 67 percent clip from the foul line.

Barrier is happy to have her future secured.

Barrier plans to major in psychology.

“They have a good academic program,” said Barrier.

Jim Walker jim.walker@irontontribune.com   McDERMOTT — They’re quite a pair. A couple of local golfers are head for the Division... read more