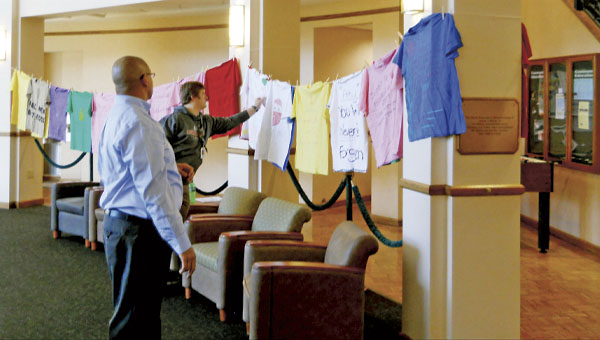 The messages on the T-shirts say it all: “Love shouldn’t hurt.” This week these decorated shirts with messages condemning domestic violence will decorate the hallways at Ohio University Southern-Ironton Campus with their special mission.

“We are raising awareness of domestic violence, which impacts all of us, no matter race or gender,” Robert Pleasant, coordinator of diversity, at OUS, said.

At OUS students, staff and faculty participate in the design work.

“Whoever wants to make them,” Pleasant said.

Tonight at 6 p.m. at Bowman Auditorium the Lawrence County Domestic Violence Task Force will host an event to honor domestic violence victims and raise awareness of the issue.

There will be a balloon launch, a speaker from the attorney general’s office and a performance by the Paramount Players.

Hanshaw, Hatfield back on county payroll The corrections officers who were defendants in a federal trial last week will not... read more