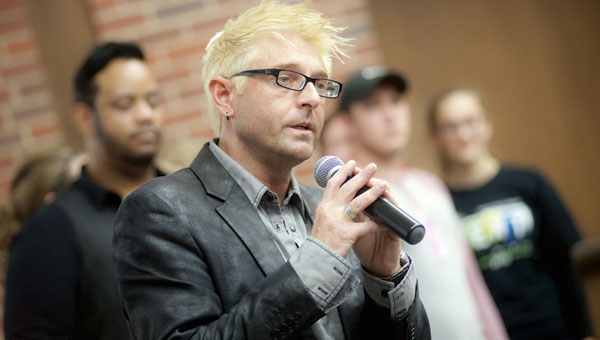 The Paramount Players performing at a domestic violence event at Ohio University Southern.

Making sure the ending results of domestic violence changes to a happy ending instead of tragedy was the underlying theme in Tuesday’s Domestic Violence Awareness Month’s commemoration.

This was the seventh year that the Lawrence County Domestic Violence Task Force and Ohio University Southern joined forces to present the awareness event.

“We are small, but very viable for Lawrence County,” task force director Elaine Payne told an audience at Bowman Auditorium, many of whom were wearing the purple of domestic violence awareness.

“We wear purple because purple signifies bruises,” Payne said. “We commemorate those who have lost their lives. There is a way to get out.”

The evening began with the traditional launch of purple balloons followed by presentations of resolutions and donations from different agencies including the Child Welfare Club, Dynergy, City of Ironton and a $1,500 donation from the Lawrence County Commission.

Paramount Players presented a medley of songs from their latest production of “Rent,” and Cedrick Davis read one of his works of verse.

That was followed by a video presentation of “Telling Amy’s Story,” where a young woman caught for years in an abusive marriage is finally shot to death my her husband.

Keynote speaker Rachel Ramirez, training coordinator for the Ohio Domestic Violence Network, built on the themes of the video asking again how can a community change the outcome and be aware of signs of abusive relationships.

“We have to think what we can do and be educated,” Payne said. “It is a control thing. We have to be aware. We want anyone to be conscious and come to awareness programs where you can learn something. Come.”