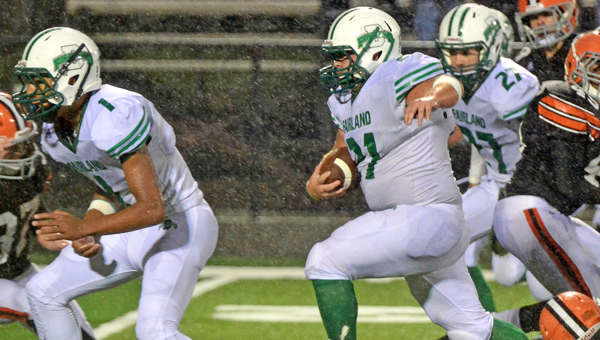 It’s good to be the favorite, right?

Usually, but in the case of the Chesapeake-Fairland football rivalry, Panthers’ head coach Andy Clark isn’t so sure.

The Panthers come into the game 5-1 and 1-1 in the Ohio Valley Conference compared to the Dragons who are 0-6 and 0-3.

But Clark has been a part of the rivalry as a player, assistant coach and head coach so he knows never to take anything for granted.

“We’re the favorite, but I’ve been around long enough to know this game can go either way. It doesn’t matter what the records are or who’s supposed to win,” said Clark.

An ominous factor is the weather forecast that is calling for an 80 percent chance of rain on Friday which can make ballhandling very difficult.

“We have to secure the ball and not turn it over. It’s supposed to rain, so you never know how that’s going to effect the game,” said Clark.

Regardless of the weather conditions — Fairland has a natural grass field — Clark said his biggest concern is the Fairland offense.

“They play hard and they can move the ball. Their biggest problem has been turnovers. They can string things together,” said Clark.

Fullback Sidney Tucker (5-8, 240) is a powerful runner who could be even more effective on a muddy surface.

“They run a bunch of formations. Tucker is a big kid and he runs well. He’s a pretty good back. The quarterback is a young guy but he’s got a lot of potential. When he has time, he can throw the ball right,” said Clark.

“They have some guys they like to throw to. Cunningham and Staten are both athletic kids who can run. They do a enough stuff offensively and they will click if they don’t turn the ball over, so we have to be ready.”

Another thing that concerns Clark is Fairland’s linebackers against the Panthers’ running game.

Chesapeake counters with a stable of running backs that include fullback Maccoy Brown, halfbacks J.W. Bartrum, Will Scott and Ty Wilcoxon and versatile quarterback Casey McComas.

Other SOC games had Beaver Eastern at Sciotoville East, Portsmouth West at Lucasville Valley, Oak Hill at Northwest and Waverly at Wheelersburg.

Meyer hopes Maryland will be turning point once again