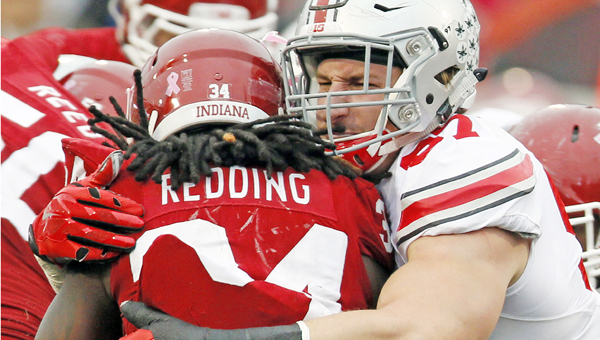 COLUMBUS (AP) — Less from Joey Bosa means more for the rest of the Ohio State defense.

The All-American end is only tied for eighth in sacks for the top-ranked Buckeyes, in part because he was suspended by the school for the opener at Virginia Tech. But the strategy to stop him benefits teammates such as defensive end Tyquan Lewis.

Lewis leads Ohio State with 3 1-2 sacks through five games after recording half a sack in limited playing time last season as a freshman.

“Some teams scheme (Bosa) a lot,” Lewis said. “When the play comes your way, you have to make it. It definitely puts you in a better situation because you’ve got a one-on-one and you want to win it every time. “

Bosa, a junior from Fort Lauderdale, Florida, has six tackles, three quarterback hurries, 2 1-2 tackles for losses and half a sack this season. Those are good numbers but not what might be expected for someone who could be the first pick in the 2016 NFL Draft.

“I don’t think it’s getting to him,” defensive tackle Adolphus Washington said. “They’re just scheming it up to where they’re having two or three people blocking him at a time.”

Bosa had 13 1-2 sacks (12 of them solo) last season when Ohio State (5-0) won the College Football Playoff championship. He knew a number like that would not go unnoticed by opposing coaches.

“I’m going out there every week and trying to do my job as best as I possibly can to free up other guys just to play well as a defense,” Bosa said. “I think we’ve been doing that and when our defense plays well, I think I’m playing well.”

Defensive coordinator Luke Fickell said getting Bosa away from multiple blockers is a chess match. Sometimes Bosa lines up on the left, other times the right. Also, the linebackers in certain situations come to the edge of the line to create a mismatch in numbers.

“We try to do a good job moving him around a bit so people can’t get a beat on him,” Fickell said of Bosa. “We have to move him around so he’s not a stationary target.

“It puts a little more on his plate, a bit more challenging for him but that’s a great thing for him. Sometimes a guy like that you have to continue to challenge and keep him more interested in the things we’re doing.”

Bosa’s development has been aided by practicing against left tackle Taylor Decker, who could be a first-round selection in 2016 as well.

“I don’t want to be conceited about myself in any way, but obviously I think we’re both high-level players,” Decker said. “And if you’re playing high-level football, the only way to get better is to go against guys that are at that level.”

It’s a win-win for each player. Especially for Bosa, who was suspended in the opening game for violating team policy.

“I do like going against him because I really think he’s the best tackle I’m going to be facing this year,” Bosa said. “When I beat him, if I can practice against him every day, it’s going to be harder than in the game.

“The thing is, we go against each other and then we just keep changing with each other to figure out new ways to beat each other. So it’s just a continually evolving thing.”