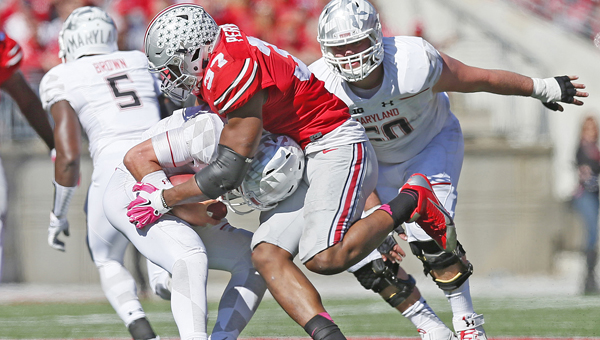 COLUMBUS (AP) — Urban Meyer doesn’t mind talking about his No. 1 team, flawed as some believe it is. However, he could do without the never-ending discussion around his two quarterbacks.

It’s not going to stop.

Meyer used Cardale Jones to start drives and J.T. Barrett to finish them as Ohio State — still unbeaten and mostly underwhelming — shook off Maryland in the second half for a 49-28 win on Saturday.

Jones threw two touchdown passes, Barrett scored three times and the top-ranked Buckeyes (6-0, 2-0 Big Ten), who haven’t met enormous expectations this season, scored 28 unanswered points in the second half to put away the Terrapins in what may have been Maryland coach Randy Edsall’s final game.

And once again, Meyer shook things up with his two QBs. After naming Jones his starter the past two weeks, Meyer decided to bring in Barrett once Ohio State moved the ball deep into Maryland territory. The results were startling: Ohio State scored a touchdown on all six trips inside the Terrapins’ 20-yard line.

“I’m very happy with it,” Meyer said of the two-QB, red-zone scheme which is reminiscent of what he used at Florida with Chris Leak and Tim Tebow. “It’s a unique situation.”

Jones, who replaced an injured Barrett last season and led the Buckeyes to three postseason wins and the national title, threw a 19-yard TD pass to Braxton Miller and connected on a 48-yarder to Jalin Marshall. He finished 21 of 28 for 291 yards — not bad for a part-timer.

“It was great,” Jones said of the dual-quarterback attack employed by Meyer. “It was all in the coach’s plan to win. He felt like J.T. would be an extra element to the game down in the red zone, and certain things we wanted to do in the running game and he proved to be right once again.”

The Buckeyes had scored just six TDs on 16 trips into the red zone before Meyer changed things.

“I think the red-zone package they put in for J.T. was perfect,” Elliott said. “I think they complemented each other perfectly. They both got into a rhythm and it worked out really well for us.”

Outscored 73-6 the past two weeks, the Terrapins put up a fight amid speculation about Edsall’s future.

Maryland quarterback Perry Hills ran for 170 yards and two TDs, but threw two picks in the fourth as the Terrapins tried to mount a comeback.

Edsall was proud of his team’s performance and side-stepped questions about whether he thinks he’ll be on the sideline when Maryland hosts Penn State on Oct. 24.

Edsall angrily left the podium from his postgame news conference to a smattering of applause from some Maryland boosters.

After needing a last-second defensive stop to survive a scare in their conference opener at Indiana last week, the Buckeyes figured to get themselves straightened out against the Terrapins, who were coming off a shutout at home against Michigan and were having to address Edsall’s status.

But Ohio State showed some familiar flaws: a defense susceptible to big plays, an inconsistent offensive line and a two-QB system that grows more complicated as the season progresses. For three quarters, the Buckeyes didn’t look like the nation’s best team before a homecoming crowd expecting better.

The defending national champs began the season as a unanimous No. 1 in the AP poll, but the Buckeyes have steadily lost first-place votes and could drop a few more.

Still, Meyer came away pleased with his squad’s performance, though he’d prefer not to spend any more time dwelling on who is lining up behind center.

Ironton Fighting Tigers’ running back Andrew Barker (30) picks up some big yardage during the winning scoring drive in the... read more