Octoberfest brings out the crowds 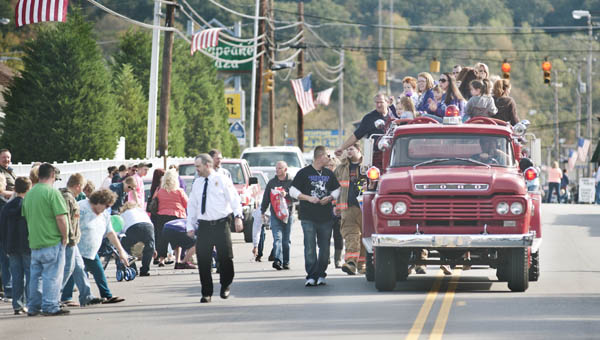 CHESAPEAKE — Triangle Park in the village of Chesapeake was awash with the color purple as residents donned the school colors as they took in this year’s Octoberfest.

“This is good,” Chesapeake Mayor Dick Gilpin said as he surveyed the crowd. “We have a lot of people today.”

John DeBoard brought a number of the wolves he cares for at his sanctuary outside of Chesapeake.

He started the sanctuary two years ago and takes in wolves from animal control and individuals who surrender them to him. He often takes the animals to events like Octoberfest to show their docility.

“They aren’t as bad as people make out,” DeBoard said.

Octoberfest has been going on for the past 20 years and is the brainchild of the Chesapeake Area Citizen Coalition that starts planning the event in the spring.

“The coalition started as a way to improve the Chesapeake area,” Gilpin said.

Originally it was made up of a variety of committees that were formed to address needs of the village. Since over time those have been met, the only committee that remains is dedicated to fundraising.

“The money that we generate we used to purchase our Christmas lights,” the mayor said.

The coalition also recently gave $500 each to the village’s fire and police departments.

“This event gives people a chance to get together,” Andy Hunt, coalition member, said. “This is where we can come together for fellowship.”

SOUTH POINT — Mark Harris and his South Point Biomass Generation company is the focus of a lawsuit filled by... read more