Bengals rally from 17-point deficit to beat Seattle in OT 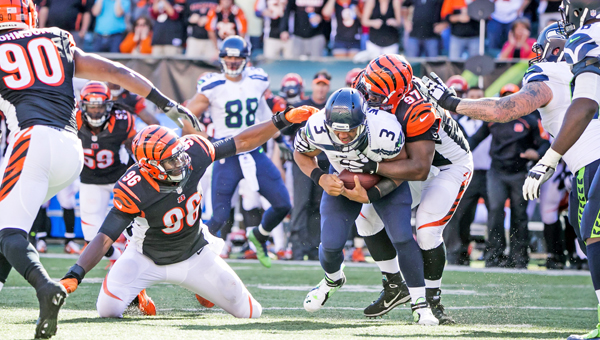 Seattle Seahawks quarterback Russell Wilson is sacked by Cincinnati Bengals’ defensive lineman Geno Atkins on third down, forcing a punt with just over two minutes remaining and the Bengals three points behind on Sunday at Paul Brown Stadium in Cincinnati. The Bengals beat the Seahawks 27-24 in overtime. (MCT Direct Photos)

CINCINNATI (AP) — Andy Dalton’s fingerprints were all over one of the Bengals’ greatest comebacks.

This wasn’t just any win. It matched the second-biggest comeback in team history and came against the two-time defending NFC champions — a signature moment for the unbeaten Bengals.

“For us to come back against a really, really good team is huge,” Dalton said.

Nobody came up bigger than him.

Trailing 24-7 heading into the fourth quarter, Dalton threw for a touchdown, ran for another and led the Bengals (5-0) on a 69-yard drive with no timeouts to get Nugent’s 31-yard field goal on the final play of regulation.

Dalton is going through a growth spurt in his fifth season, leading the NFL in fourth-quarter passer rating. He went 13 of 15 for 135 yards in the fourth quarter and overtime on Sunday.

“We imploded in the third quarter, but we righted ourselves and started putting one play on top of another and kept going,” coach Marvin Lewis said.

Seattle (2-3) punted twice in overtime, giving the Bengals a chance to pull it out. Nugent’s deflected field goal ended it with 3:36 left in overtime, leaving Cincinnati 5-0 for the first time since 1988, the last time it went to the Super Bowl.

It was the second time Cincinnati had overtime a 17-point deficit in the fourth quarter and won, according to STATS. The Bengals also did it at Baltimore in 2004 for a 27-26 victory. Cincinnati overcame an 18-point deficit to beat Arizona 24-21 in the 1997 season.

The 17-point collapse matched the biggest in Seattle history. The Seahawks also blew such games in 2003 against Baltimore and 2004 against St. Louis, losing in overtime as well.

“The most frustrating part is we didn’t finish,” Seahawks receiver Doug Baldwin said. “We’re known for that and we didn’t do that today.”

The Seahawks looked to be in good shape after scoring a pair touchdowns during a 2-minute span of the third quarter. Undrafted rookie running back Thomas Rawls ran 69 yards for a touchdown, part of a career-best 169-yard game.

Bobby Wagner then returned a fumble 23 yards for a touchdown, handing a 24-7 lead to the NFL’s second-ranked defense. Unlike Monday night, when Kam Chancellor stripped the ball from Detroit’s Calvin Johnson to preserve a 13-10 win, it couldn’t come up with the big play at the end.

“We wanted to show that we’ve got a great defense and a great team,” Bengals cornerback Dre Kirkpatrick said. “We overcame a lot of things in this game. Down the line, this will be motivation for us that we’ll be able to look back on. We’ve been in this situation, and we’ve overcome it.”

Dalton was 30 of 44 for 331 yards with two touchdowns, an interception and a season-high four sacks. His 11-yard TD pass to Tyler Eifert on the game’s opening drive ended Seattle’s streak of 20 defensive possessions without allowing a touchdown.

That was all the Bengals managed until Dalton started the big comeback.

Russell Wilson was 15 of 23 for 213 yards with a touchdown, a tipped interception and four sacks. His 30-yard pass to Jermaine Kearse was the first touchdown the Bengals had allowed before halftime this season.

Notes: The Bengals are one win shy of matching the best start in club history. They went 6-0 in 1975 and 1988. … Wagner had a strained chest muscle, but finished the game. … Wilson was sacked four more times, bringing the season total to 22. … Earl Thomas got the Seahawks’ first interception of the season. … Cincinnati had a potential 72-yard TD pass to A.J. Green nullified by a holding penalty in the first quarter. Green had five catches for 65 yards in the first half, only one more for 13 yards the rest of the way.

BALTIMORE (AP) — It took a prolonged performance of historic proportions for the Cleveland Browns to finally win on the... read more