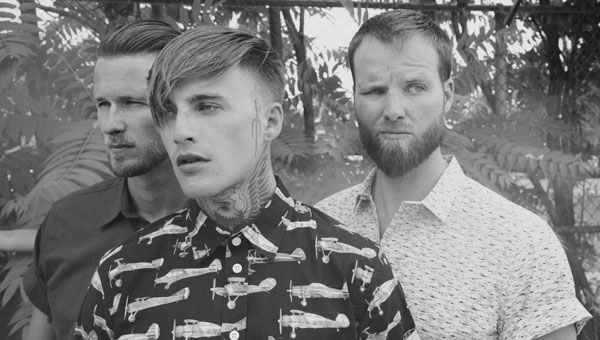 Highly Suspect to perform at the Ro-Na Halloween weekend.

Tonight, Brooklyn-based rockers Highly Suspect will perform at Cincinnati’s 20th Century Theater, before moving on to venues in Michigan, Wisconsin, Nevada and California.

It has been a surreal experience, said lead vocalist Johnny Stevens.

“It’s been really wild that we can go all over the country,” he said of the three-piece group, whose first full-length album, “Mister Asylum,” was released back in July. “Everything is still scratching the surface.”

On Oct. 30, the group will pass through Ironton to headline a concert at the Ro-Na Theater, part of a weekend of Halloween festivities. Opening the evening at 7 p.m. are Bobaflex and Split Nixon.

Highly Suspect was formed in 2009 by Stevens, 29, and his friends, twins, Rich and Ryan Meyer, 30. The group went to high school together in Cape Cod, Massachusetts, and after graduation lived together, where they starting playing music together.

Stevens said it was his father, a piano teacher, who got him into playing music. Although he wasn’t into playing the piano, Stevens picked up a guitar.

“I never looked back,” he said, although he said his first dream was to be a professional BMX rider.

By the time Stevens hit is early 20s, music had become a realistic career goal.

Now the group calls Brooklyn home and has a sound that’s evolved from many genres of music, but rock ‘n’ roll, according to Stevens, is the easiest way to put it.

“We listen to everything we possibly can,” Steven’s said. “We take the good things people are doing and put it in our own vocabulary.”

Their up and coming success has taken them all over the country and to music festivals like Bonnaroo and Lollapalooza where they have played with Catfish and the Bottlemen, Scott Weiland of Stone Temple Pilots, and others.

The New Year will see the band touring in the United Kingdom.

So what can the crowd expect from Highly Suspect?

“We bring a lot of passion,” Stevens said, noting that all of their songs are written form personal experiences. “It all comes from the heart. Every show is different. … We just wing it when we get up there and feel the audience. We’ll know within a couple of songs what kind of mood they are in.”

Highly Suspect’s first single, “Lydia,” is getting local airplay in the Tri-State and across the country, as well as on Internet radio sites like Spotify.

Stevens said it is written about his ex-girlfriend and that its success was somewhat of a surprise.

“It’s a really relatable song,” he said. “I had one dream and she had another dream and it led us in different directions. … It’s sad when you have to let love go. It’s a pretty literal song.”

As for the grueling touring schedule, Stevens said the band can’t get enough of it.

“We couldn’t feel more grateful to have the opportunity to do this,” he said.

Stevens said the group will also have a sort of pop-up fashion line, MCID, available for sale at the show, which includes items that can’t be found in their online store.

On Saturday, the upstairs of the Briggs Lawrence County Library Ironton branch will be filled with a variety of crafts... read more