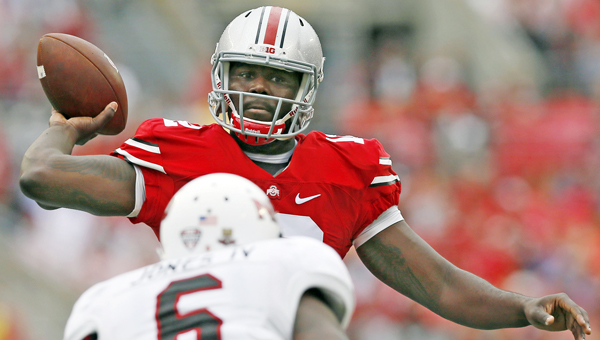 COLUMBUS (AP) — The two-quarterback system with Cardale Jones driving Ohio State across the field until yielding to J.T. Barrett in the red zone is not quite a permanent solution after one game for the top-ranked Buckeyes.

So far it has gone well, with the Buckeyes (6-0, 2-0 Big Ten) scoring touchdowns on all six trips inside the red zone in a 49-28 win against Maryland on Saturday.

“I thought it worked outstanding,” quarterbacks coach/co-offensive coordinator Tim Beck said. “I was proud of both guys. Obviously, it’s not easy but they’re both great friends and great competitors.

“Coach Meyer believes in them, like we all do, and we can use their strengths and get them on the field to help this football team.”

Meyer reiterated that Jones is still the starter because Barrett has not beaten him for the job. However, Barrett’s running ability and read option capabilities are better.

“Cardale can certainly run,” Meyer said. “But when you have that threat (with Barrett), you saw it Saturday, you have to defend that now.”

He has gone through this before. In 2006, Meyer inserted Tim Tebow near the goal line in relief of Chris Leak and went on to win a national championship for the Florida Gators, beating Ohio State 41-14 in the BCS title game.

Barrett took over for Jones and led Ohio State to five touchdowns vs. Maryland. He rushed for scores from 3, 1 and 18 yards and running back Ezekiel Elliott ran for scores from the 2 and 16.

“In the red zone we found ways to neutralize their loaded boxes that allow us to get touchdowns as opposed to field goals,” he said.

Meanwhile, the possibility that Barrett will pull up and throw also creates problems for the secondary and frees the receivers.

“When you establish a presence to have a dual-threat guy back there, sometimes it changes the coverages,” Beck said, “which now allows more single one-on-one type things as opposed to trying to fight in tight zone windows.”

The other red-zone score was a 19-yard pass from Jones to H-back Braxton Miller. It came on the first play after Miller made a diving catch for 33 yards on a pass by Jones, who finished 21 for 28 passing with 291 yards and two touchdowns.

Miller, the starting quarterback for the Buckeyes until missing last season because of shoulder surgery, is watching the QB competition from a different perspective.

“I leave that up to Coach Meyer,” he said. “I’m just trying to make the situation better for the receivers and be a leader at my position. They’re going to have to figure it out.”

Ohio State’s next opponent, Penn State, may determine how often Barrett is used.

“This is a whole other challenge,” Meyer said. “It’s every week. (The Penn State) defense is probably going to have something to say about that. It’s a very good defense we’re facing.”