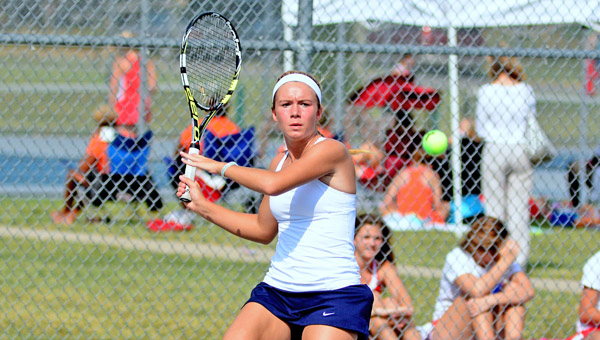 SOUTH POINT — Nothing seems to change for Madison Riley, and that’s something she wants to change.

And while she continues with her success year after year, she has a few things she wants to change at the state tournament.

“I definitely want to win my first round. It’s been my goal every year. The field is so deep. It’s not like West Virginia or Kentucky. In Ohio, everyone is in one big draw and the first round is always the toughest,” said Riley.

“I’ve been working for this and everything has been coming together. I just need to be confident. I’ve been doing this long enough to be confident and not worry about anything.”

In the finals, Riley earned the district’s No. 1 seed in the state tournament by beating Taylor Fair of Carrolton 6-0, 6-2 to earn another trip to the Ohio State University tennis courts.

While the results say it was an easy road, Riley said it was tougher than it looked.

“I definitely felt pressure since it is my senior year. I did what had to get the lead early and finish the match off early,” said Riley.

Riley will open the tournament by playing Kaylee Davis of Spencerville. A win will send her against the winner of Lauren Gillinov of Shaker Heights Hathaway Brown and Kelly Pleiman of Dayton Chaminade Julienne.

Gillinov is the defending state champion.

“We all know each other and we’ve all grown up playing in the same tournaments,” said Riley. “We’re used to each other’s style of play.”

“The last time I played some of them I was 12, so I can’t even remember what happened. With traveling tennis I’ve played them before.”

Riley began playing tennis when she was 9 years old but she didn’t start playing tournament tennis until the following year.

“I was trying to figure out a sport I enjoyed. My mom had me try basketball and tumbling. I just really liked tennis,” said Riley.

Besides tennis, Riley also plays on the golf team and runs track. Riley said she uses golf as a stress relief.

“Golf is something I do just to take my mind off tennis. If I’m having a stressful week, I go play golf. It just calms me. And I just love running track,” said Riley.

Although the state tournament is foremost on her mind, Riley is hoping to play tennis at the next level.

“I definitely want to play college tennis. Next year I want to finish my USTA career,” said Riley. “I’ve talked to three or four schools. I haven’t decided yet.”

CLEVELAND (AP) — Those booming shouts for Johnny Manziel have quieted to a murmur. With his third straight strong performance,... read more